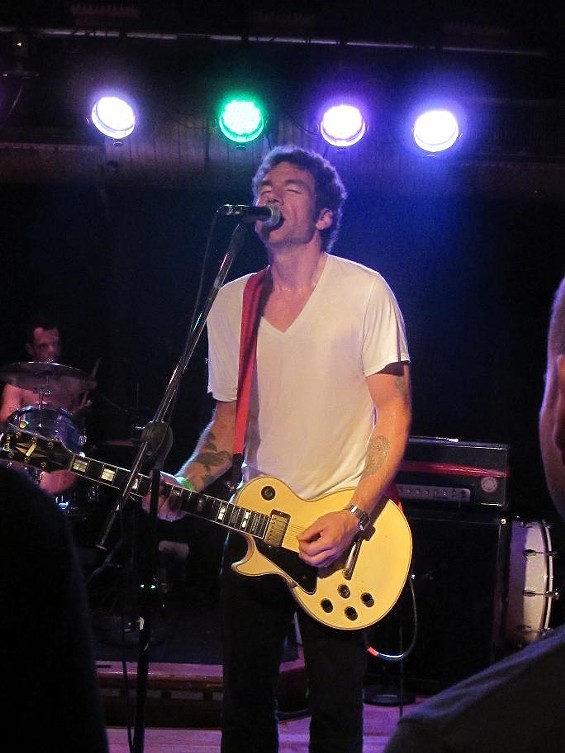 It was hard to catch, but a couple songs into forgetters' set Friday night at Cicero's, singer/guitarist Blake Schwarzenbach glanced back at the band between songs and stated, "I'm actually feeling really good tonight." It was a simple comment, one that could sometimes be interpreted as a nervous utterance. However, anyone that's followed Schwarzenbach's career knows that if it's coming from his mouth, it's as deliberate and dead serious as a heart attack.

Schwarzenbach was clearly in good spirits. After experiencing some technical difficulties with an unruly sampler, the band forged ahead and seemed as eager to unveil a set of brand new songs as the crowd was to hear them. With the help of a slew of pedals, Schwarzenbach built a wall of guitars as he plucked away with his signature wrist-cuffed-to-the-hip-of-his-guitar stance. He was also in charge of the band's unofficial fourth member, the voice inside the sampler. Throughout the set, voices chimed in and out providing the perfect poetic ambiance, a trick Schwarzenbach has experimented with in the past. At times, the voices were as integral as any instrument on the stage.

While it's hard to not focus on the illustrious front man, it would be negligent to overlook the forgetters rhythm section. Drummer Kevin Mahon isn't an imposing dude by any means, but his drumming can consume a room. His speedy, airtight cymbal whips popped with every downstroke of the guitar (see "Vampire Lessons"), and he pummeled his snare like boxer on a speed bag. Bassist Caroline Paquita's chord strumming aptly filled out the sound, and often took a voice of its own when Schwarzenbach muted his guitar to deliver verses (see "Too Small to Fail"). And when all these elements clashed, things got blissfully dizzy.

After trudging through the '90s and '00s as the quarterback for punk and indie stalwarts, Jawbreaker and Jets to Brazil, it's clear that Schwarzenbach is making a deliberate effort to start from scratch with forgetters. In my recent forgetters show preview, I declared the band as "more Jawbreaker than JTB." And after listening to the band's debut double 7", it still seems like a fair statement. But after seeing the band live, it's hard to not feel like Schwarzenbach duped the listener with an interesting sleight of hand. It's almost as if the double 7" is intended to be a warning decoy shot, one designed to scare off the pretentious indie kids and rally the loyal punks. Regardless of motives, all the devout Schwarzenbach followers should be punching their tickets to hop back on board, because he's truly struck gold with the new band.

Chicago's post punk spazz-funkers 97-shiki delivered a truly interesting set. Ever wonder what a meth'd up Devo would sound like if they were on Dischord Records? Now you know.