As might be expected, the Alice Cooper/Rob Zombie "Gruesome Twosome" double bill at the Family Arena was a somewhat surreal experience. Between the fans aping Cooper's look, those dressed to the goth nines and the setting - a faceless concrete arena in the middle of nowhere -- the night felt like a bizarre, low-budget b-movie.

A rather-small crowd - the floor was half-full and the upper bowl was mostly empty - nevertheless hummed in anticipation as a curtain advertising Cooper's Theatre of Death veiled the stage. Half an hour after trashpunk openers Murderdolls finished, the lights went down and school bells rang - signaling Cooper's appearance and, of course, "School's Out." As if cryogenically preserved, the 62-year-old strutted out in full Alice Cooper regalia: baton, tails, eye make-up, wild hair and black pants. Giant balloons filled with confetti exploded over the audience as he strutted around the stage. (A goth Flaming Lips?) He followed "Out" with a classic and a newer song: "No More Mr. Nice Guy" and 2000's "Wicked Young Man."

It's to his credit that the vintage and modern blended together seamlessly during the set, from 1971's "Under My Wheels" to 2008's "Vengeance Is Mine." Cooper's gravelly gargle is one of rock's great voices, and he's aged well as a singer. His backing musicians - who have played with acts such as Brother Cane, Dio, Y&T and Megadeth - also kept him young; they added flashy solos or unleashed effortless riffs as needed.

Of course, Cooper's audience comes to see his shtick as well - and he didn't disappoint. He sported a straitjacket, came onstage in a wheelchair, wore hospital scrubs and died onstage several times for good measure. (If you're scoring along at home: guillotine, hanging, giant syringe and being stabbed while encased in a box.) For "Dirty Diamonds," he threw necklaces into the crowd; during "Billion Dollar Babies" he took a spear of money, shook that over the audience and then sheared the head off a doll. Cooper also speared a ninja with a pole and battled with a seductive nurse. 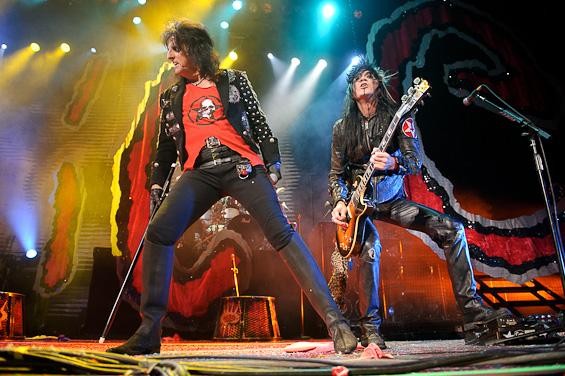 It must be noted that a few of their interactions -- him strangling her with a mic stand or mock-hitting her - were a bit uncomfortable in terms of their implied violence. Now, Cooper gets away with this because it's been part of his repertoire for decades. These moves are a relic from an earlier era when they weren't as taboo -- and also because it's part of his act, a persona he's playing. (Besides, she had her revenge by kicking away a stool so Cooper hung himself.) But it's hard not to think that such shock-rock moves would receive quite an outcry today if a new band attempted them.

And it's a testament to Cooper's vitality that this still does unsettle. His Rock & Roll Hall of Fame nomination is well-deserved. He's an entertainer, who's just so happened to have influenced every rock, metal, glam and hair-metal band of the last several decades. But Cooper's antics don't replace his musical talent - and that's all-too-rare to find these days. 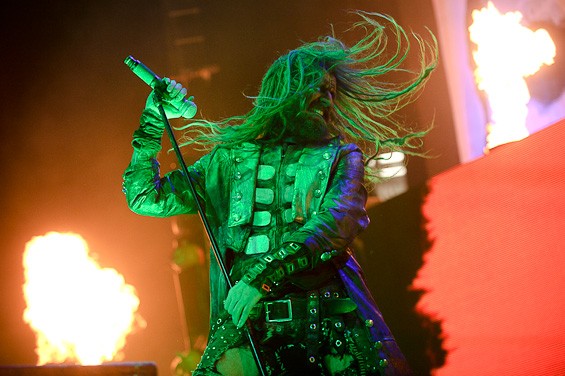 Rob Zombie's elaborate stage set-up lived up to expectations. LCD screens projecting comics, lyrics, movie clips and digital fire flickered everywhere: small ones at the front of the stage, slightly larger rectangles behind him parallel with the drumkit and a giant one looming over the whole production. Grinning evil pumpkins, skeletons cradling mic stands, pyro and various exaggerated figures -- including a giant robot and several other leftover characters from past tours - lent a apocalyptic carnival feel to the proceedings.

"Pussy Liquor" - which Zombie told the audience he just started playing again this week, because "you're the ones who keep requesting this fucking song" - was another bright spot. Sleazy-old-man guitars leered at galloping, "Personal Jesus" beats, as the spry Zombie spun around onstage like a line-dancer at an X-rated country bar. (After the song, he sensed that the song connected: "I think I can have fun playing this song all night.") White Zombie's "Super-Charger Heaven" and "Thunder Kiss '65" kept the crowd frothing. The latter devolved into Zombie grabbing a spotlight and wandering around the base of the arena, while guitarist John 5 remained on stage soloing - from technical riffage on through "dueling banjos" to the Star Spangled Banner. This bled into a cover snippet of Cooper's "School's Out," to end the main set.

Zombie was in rare form when it came to stage banter. He ribbed bassist Piggy D because he "Twitters away his life" and goaded him to post right there onstage. ("I know what you're going to say - 'OMG great crowd' or 'LOL, fuck you, Rob.") At another point, someone in the pit lifted a prosthetic leg above his head in fist-pumping celebration. (Yes, this was awesome in and of itself.) Later, the leg was still being hoisted in the air - and it somehow traveled onstage. Zombie grabbed it and said playfully, "Okay, whose leg is this?" He chided them playfully for losing the limb and put it on the stage to "keep it safe" and said, "You get it back after the show. You throw it around like a piece of baloney." Very quickly, however, he gave it back to its owner, with the admonition: "Put your leg back on and go get some nachos." 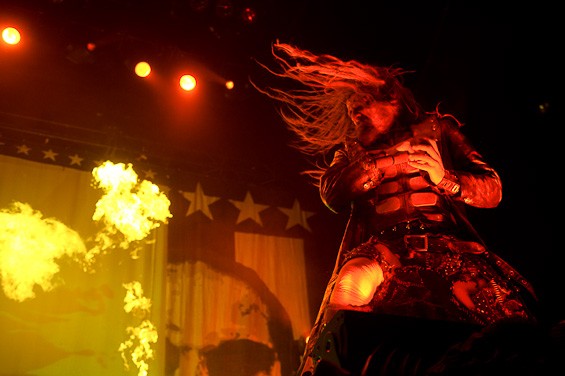 In terms of shtick and absurdity, Zombie and Cooper share the same sensibilities. The former's sense of humor isn't necessarily always as obvious as his love for horror-movies and comic art. But last night, it elevated the set beyond kitsch and spectacle.

Personal Bias: My introductions to both Alice Cooper and White Zombie came courtesy of Beavis and Butt-head.

"How come these guys are never on TV? They should play this video all day long." and "Herman Munster is cool."

Alice Cooper: "School's Out" "No More Mr. Nice Guy" "Wicked Young Man" "Ballad of Dwight Fry" "Go To Hell" "Cold Ethyl" "Poison" "From the Inside" "Nurse Rozetta" "Be My Lover" "Only Women Bleed" (something missing?) "Vengeance Is Mine "Dirty Diamonds" "Billion Dollar Babies" "Killer" "Feed My Frankenstein" "Under My Wheels"