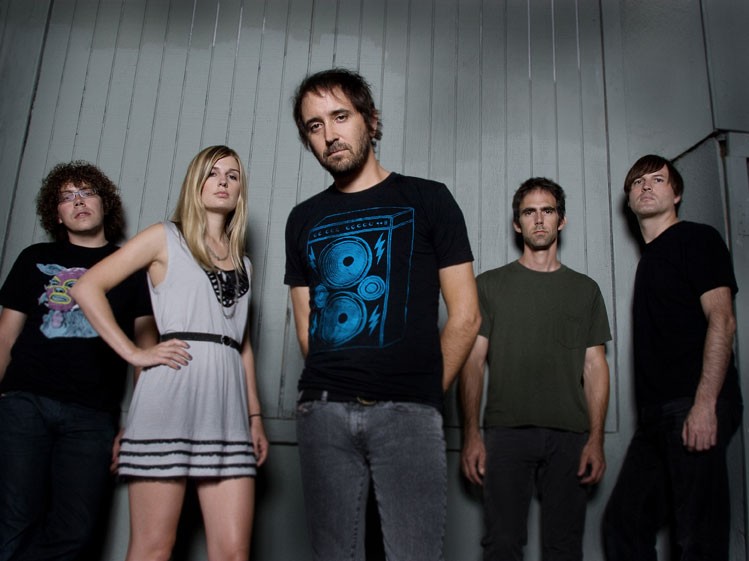 Film School is often mistaken for a one-man operation with a minimally involved supporting cast. But after chatting with singer/guitarist/keyboardist Greg Bertens, it's clear that his project is - and has been -- dependent on collaboration with an ever-evolving cast of players. The people in Bertens' musical sphere at any given time contribute to the band's development.

Film School formed in the late '90s and has released three outstanding albums (2006's Film School, 2007's Hideout and this year's Fission) full of shoegaze-influenced noise-pop, with eerie undercurrents of unnerving shadows. But this year's Fission sets itself apart by retaining all of the band's woozy, reverberating spirit while incorporating healthy doses of sunshine and sugar-coated pop. A to Z caught up with Bertens for a chat about the band's history, past rosters and its approach to writing and recording Fission. The band's at the Firebird tonight with the Depreciation Guild and Luxora. The show starts at 9 p.m.; tickets are $10 to $12.

Shae Moseley: Film School has always been a revolving cast of players. Were there any major changes for the new album? Greg Bertens: Well, on Hideout it was primarily me who wrote the material with the help of Jason [Ruck]. The two of us have kind of been the core of the band since the beginning. But after the songs were written we brought in Dave [Dupuis] and James [Smith] and Lorelei [Plotczyk]. Dave played a little bit on the record, James played most of the drums on the record and Lorelei played bass on a track or two but didn't sing at all. So, on the new record [Fission], Lorelei and I wrote most of the songs and Jason wrote a song and there are also some co-written songs by the whole band. Basically, there is a lot more of Lorelei on the new album both playing bass and singing. But moving forward, we just got a new drummer and Dave is actually no longer playing guitar so.... [laughs]

So, do you usually feel like you're learning how to execute an album live after you get done recording it once all of the pieces of the lineup fall into place? Oh yeah, for sure. Because with this album Dave's not going to be out with us so we're going to be a four-piece. We're actually playing in a different manner. We have a lot of computer tracks that will be mixed in with us playing live.

A lot of people play to tracks these days but there are a lot of different ways to incorporate it. How are you guys going to utilize that technology? We're using Ableton, which allows us to use both sampled tracks as well as midi tracks. We're actually able to cover most of the parts ourselves but there are electronic elements that we can't re-create, like drum machines. So, we put it all to a click track and the drummer plays to the click. It's primarily just to fill-out the sound and cover the things that we can't play live.

I started listening to you guys around the release of your self-titled album but I know you were around well before that. Could you give me the condensed version of Film School's history? There seem to be a lot of conflicting information out there. Well there's so much confusion. There are all of these different stories and I think that is one of the problems with the web is that stories are printed like they're facts.

Well, the RFT is here to set the record straight.... Thank you. [laughs]. Film School started in 1998 as a two-piece and it was me and another drummer named Paige Weber. I played guitar, keyboards, sang and wrote songs and she played drums. We actually recorded a bunch of material that never saw the light of day. Like, there is this four-song cassette tape out there somewhere that we were distributing on our own for a while. So that collaboration lasted for a couple of years but around 2000 I went off on my own and wrote a bunch of songs and Paige kind of dropped out of the picture so I brought in some other people to help me record those songs. One of those people was Scott Kannberg from Pavement. So Film School has always had this element of collaboration with other people. Film School, "Sunny Day"

The people who cross your path at the time? Exactly. What confused everything is when Beggars (Banquet) put out the self-titled record in 2006, they sort of insisted on us calling it our first full-length release in order to gain momentum and come out as a fresh new band. But in actuality we had already released a lot of material before that and went through a lot of different incarnations.

But I think for most people like me who lived in the Midwest, that was when you kind of showed up on our radar. Yeah, we were a totally obscure band. Beggars was the one who introduced us to the world for sure. But the story they put out wasn't really true to what had happened up to that point. The band had been around in some form or another for 6 or 7 years before that.

So, getting back to the band as it exists today: How did you guys approach recording Fission? Every song was different. Lorelei brought in a song called "Sunny Day" with just bass and vocals and when she brought that in, each person just kind of added their own elements and I kind of had an idea for the general presentation of the song like to make it a faster, more energetic song. So, it just built from there. But a song like "When I'm Yours," I brought that in as pretty much a complete song and we wrote one change for it as a band. It just varies from song to song. Sometimes we're coming together to add parts and arrange and other times we're just coming together to learn a song that already exists.

A lot of the songs feel a bit brighter compared to other Film School material. Was that something you were going for? I think a lot of different elements came together to get to that point. For instance, Lorelei brought in some songs like "Sunny Day" that have more levity to them by their nature. Also, I've just been listening to more pop, traditionally structured songs recently. It's just kind of what I've been gravitating towards as a music listener, so I'm not surprised that it's also showing up in the music that I'm writing.

It does in a way but I wouldn't really call Fission a pop album. Yeah, I don't think we'll ever be able to write a pure pop song that has no darker tension in it. I think that will always be an element in the music we write. It's ironic because I've seen a couple reviews where people are describing it as super-bright and commercial music and I'm wondering what they're hearing in order to gather that assessment. I think that Film School songs will always have some element of tension in it that focuses around a melancholic or dark element.

I can hear that and I always enjoy the combination of those two elements. I enjoy that too, and I feel like these songs are more complex because of it.