Review + Setlist: Drive-By Truckers and the Henry Clay People at the Pageant

As the house lights dimmed, and the P.A. pumped out background party music curated by the always-animated "Stroker Ace," Mike Cooley (singer, guitar), DBT assumed the stage, checked the levels and primed its artillery of Fenders and Gibsons for a marathon session of Southern rock hellfire-and-brimstone. Wasting very little time, the six-piece band lunged into "The Fourth Night of My Drinking" from this year's The Big To-Do.

If the band seemed somewhat reserved, it only took a few songs for them to settle into the cut and relax. As is always the case with DBT, by the time they reached the chorus of "Where the Devil Don't Stay, from 2004's The Dirty South, each member looked as if they were having more fun than anyone else in the room. 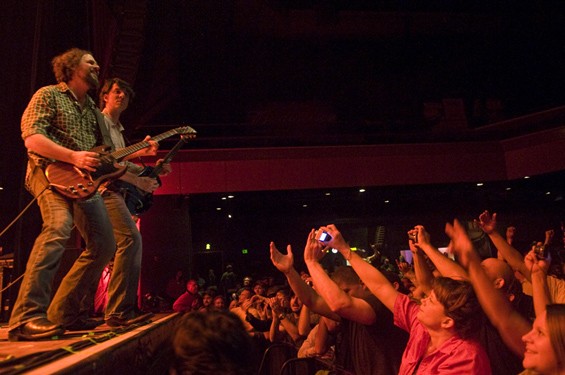 While no two Truckers shows are the same, you got the sense that the band was extra feisty Saturday night. Whether it was the bottle of Patron the band passed around, the Jack Daniels making the rounds, or maybe the eerie fall air that seems to envigorate us as the seasons change, it was clear DBT was dialed in with extra sense of flare. Cooley's Southern-fried solo on "Three Dimes Down" bit and hissed with more humor and vigilance than usual, while mop-topped organist/piano player, Jay Gonzales, hunched over the ivories and drenched the already-booming sound. Never committing to a set list, the band even snuck in a few curve balls ("Feb 14," "The Wig He Made Her Wear") that rarely find their way to the live stage.

After frontloading the first half of the set with newer material, both the band and the crowd were ready to dip into the back catalog hits. Almost twenty songs in, the band left the stage briefly to catch their breath -- and to let fans refill their whiskey glasses. As they reemerged, Hood approached the mic and pointed out that the night was in dire need of a song about "sister fucking." With that, DBT gracefully leaned into their twisted ode to incest, "The Deeper In" from 2004's Dirty South.

From there, they closed out the final stretch with newer staples ("It's Gonna Be I Told You So," "Self Destructive Zones") and older gems ("Zip City," "Let There Be Rock") from the band's defining album, Southern Rock Opera.

As if the crowd wasn't dazed and punch drunk enough, Hood made sure to deliver one final blow and led the band through a raucous version of Jim Carroll's "People Who Died." Hood hoisted the mic stand over his head and squealed out the lyrics in a manner that would have made the late Carroll proud as hell.

And with that, DBT sent the woozy fans back out to the streets with their heads spinning and hearts pumping. Just another day at the office for the always-electrifying DBT.

Openers, The Henry Clay People, did a great job at warming up the crowd. Their shout-it-out rock n'roll rompers laid the perfect groundwork for what would turn out to be a fine evening of rock. The L.A. outfit was without their drummer for the evening; however, "Warren from Missouri" filled in perfectly and, by the end of the set, he had the whole damn place rooting for him. When the band closed out its set with a risky-albeit-gratifying cover, Springsteen's "Born to Run," it was hard not to root for the guy as he circled his kit and peppered every cymbal with sheer glee.


The Fourth Night of My Drinking
Where The Devil Don't Stay
Drag the Lake Charlie
Birthday Boy
The Wig He Made Her Wear
Three Dimes Down
Hell No, I Ain't Happy
Shut Up and Get On the Plane
Road Cases
72 (This Highway's Mean)
Santa Fe
Women Without Whiskey
Where's Eddie
Everybody Needs Love
Love Like This
Feb. 14
Marry Me
Lookout Mountain

Encore:
The Deeper In
A Ghost to Most
Ronnie and Neil
Self Destructive Zones
It's Gonna Be I Told You So
Zip City
Let There Be Rock
People Who Died