Review + Setlist: The National Glows Past the Gloom at the Pageant, Thursday, September 30 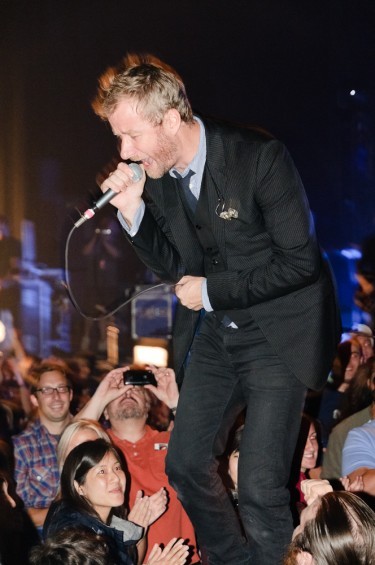 The National was in chatty mood at the Pageant, or perhaps baritone intoner Matt Berninger and brothers Aaron and Bryce Dessner were just trying to fill the awkward silences between the acts of their rock opera version of Who's Afraid of Virginia Woolf?

They debated the meaning of songs, picked each other's nits, and when one brother went one mock too far, the other told him to "shut up."

It wasn't really high drama. Standing before a jammed, near-capacity hall, they were just high on the dark thrill of the night.

Even opener Owen Pallett (née Final Fantasy) seemed cheered by the artist-made paradox of inflexibly grim messaging and a kind audience response. "This song is about wishing death on your enemies," he half-joked. If Pallett feared a mass exodus of heterosexual males, he needn't have, as the bros (and sisters) in attendance politely applauded his dense violin and drum looping; I heard no outright boos, just a heckle for his percussionist to take off his shirt.

In pleated khakis and a white buttoned-down shirt, Pallett was ready for a casual recital, and stood statue-stiff to deliver SAT vocabulary tests like "The Great Elsewhere" and "Lewis Takes Action." The high school kids jammed on the floor got it; they couldn't have cared less how gay he is. Pallett's voice echoed Martin Fry of ABC, and even when he screamed into the pickup of his violin and sent the weird sample bouncing off the walls, the room was quiet (the back bar being the obvious exception) and semi-transfixed. 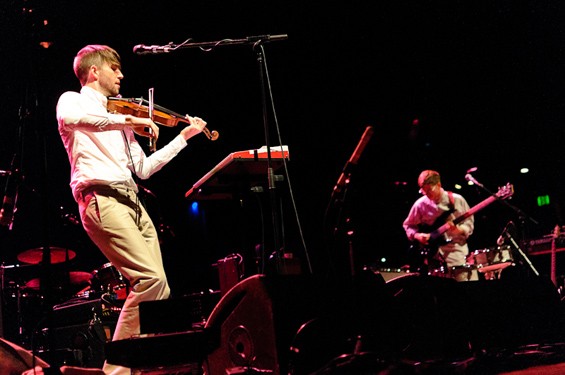 He ended the set with a confession of what it's like to be touring the US under the heartbreaking headline news of a homosexual youth's suicide. If you know a gay kid, give him a hug, he gently requested.

Before a high violet curtain (not a metaphor) and a blacked-out stage, the National walked out to an overture, Neil Young's "On the Beach," readying their instruments precisely at the lines "I need a crowd of people, but I can't face them day to day." Often, vocalist Berninger didn't, turning instead to the drum riser to crouch and howl at a kick-drum microphone that refused to thump at his command. He ran on and off stage, either to give the sound crew a whipping or just to fill his glass.

Opener "Runaway," from High Violet, was slow and luxurious, the band bathed in blue and white spotlights, and the horn section, trumpet and trombone, warming to the drone.

"Anyone's Ghost" was stronger, with the first of a dozen violin leads taking the place of guitar solos -- not that one would expect any from the National. The music stands or falls on the harmonics and textures and the relentlessly mid-to-cantering tempos. No one dances, and hardly anyone even moves at a show like this. At the single "Bloodbuzz Ohio," the gunshot drumming snapped the crowd and the musicians from their daze. The arrangement, like all of the nineteen songs this evening, was supernaturally precise, save the first of a few croaking yelps from Berninger and a burst of sleigh bells at the end. 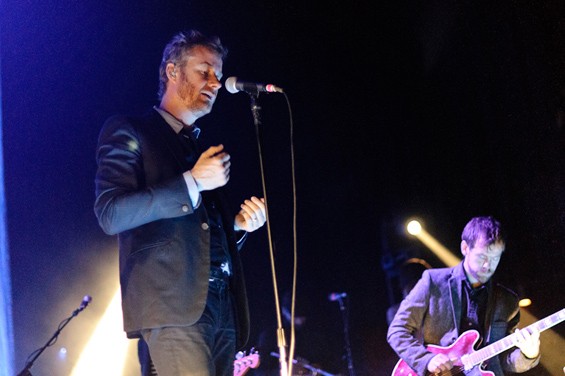 "This is a song about Matt's dick," one of the Dessners explained. "We call him Dick Jagger." The song "Slow Show," one of a handful from The Boxer, captured the totality of the band's concept: Sink into the souls of the dying middle class, lead us into lives of quiet desperation, hold up the mirror to the mire, and then rise, rise, rise up ye dead men from the "Squalor Victoria." The perpetual motion machine of blurred guitars, well-mixed piano and brass fanfare was cathartic, the musical equivalent of finally facing the wreckage of post-capitalist life and feeling the violent climax (weirdly spiritual, not sexual) of simply getting your shit together just enough to muster the courage to stalk and scream like Iggy Pop. And that's what Berninger did as the liquor finally kicked in.

"Conversation 16," introduced as a song about marriage or cannibalism (in National world, what's the difference?), indicated that you haven't truly experienced a concert in 2010 (even if it sometimes sounds like Manchester 1984) until you've heard a bunch of dudes sing along to the refrain "I was afraid I'd eat your brains." The National's audience is hardly Danzig's demographic, but it appreciates the communion of facing the fucked-uppedness of our collective id together. And it appreciates the gorgeously whispered harmonies on the principal set closer "Fake Empire" and a round of high fives and hand clasps between Berninger and the pit.

The three-song encore began with "Vanderlyle Crybaby Geeks" and "Mr. November," on which the singer wielded his mic stand like a bloody pike and twisted free from the cables to roam through the under-21 section, stagger along the tightrope of the narrow floor bars, disappear into the pit, and make it back on stage for a majestic "Terrible Love." Guitars were raised for a final staccato stream; the orchestration sounded brilliant, echoing from the post-rock summit.