Interview: Bryce Dessner of the National on High Violet and Talented Pals 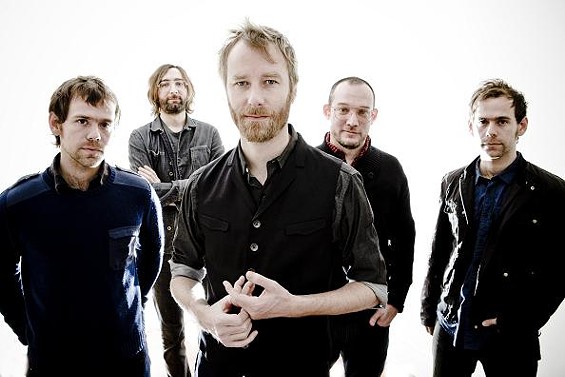 Tonight, the National returns to St. Louis for the first time since a (very-sold-out) show at Blueberry Hill's Duck Room in June 2007. Owen Pallett - who we interviewed yesterday - is opening. The National is touring behind High Violet, its first new album since 2007's highly acclaimed Boxer. Guitarist Bryce Dessner chatted from his Brooklyn home about the new album, the National's many talented friends and the band's contribution to last year's Mark Mulcahy tribute album, Ciao My Shining Star. (The compilation was released in memory of Mulcahy's wife, who tragically and suddenly passed away.) Annie Zaleski: The one thing that struck me is that there's a lot more going on in the background on High Violet, just in terms of textures. It's very much a headphone record, which is such a cliché, but that struck me. Talk about that. Bryce Dessner: In a way, we do make records for people who are listening on headphones. We listen that way a lot, so maybe that leads to the kind of layering...We like to say that our records, you can listen to them over and over again and hear something new each time. Maybe that's overstating it, but it is a nice way to work, where the songs reveal themselves slowly and differently over time.

We built our own studio in between Boxer and making High Violet, so it was the first time we really had a creative workshop environment where we could try lots of different things out. In some ways, that meant really working on the arrangements a lot. There's a couple of them, "England" or "Vanderlyle Crybaby Geeks," that are probably the biggest orchestral arrangements on records that we've ever done. Then there's other elements where the opposite is true as well. From the minute we started working on the record, we recorded everything. There's a lot of sounds on there that are almost more improvised.

Boxer has a really elegant, almost minimalist aesthetic to it, where it's very spare and kind of restrained - High Violet does have a lot more of these spontaneous moments or sounds that we kept, that we like so much. The beginning of the record -- some people complained about how fuzzy the guitar tone is on "Terrible Love." To us, it was a sound we had envisioned but never had been able to achieve. In a way, it's like an accidental guitar tone that we were able to keep.

Do you think [these complaints are] also a reflection [of how] after Boxer, people had a lot of expectations for you? It's definitely a very anticipated record. When Boxer came out, there was a huge Internet war that followed, where people were fighting about whether Alligator or Boxer, which one was better - specifically I think Alligator is more of a rock record, and Boxer is much more restrained. High Violet, how that fits with those two - I don't know. To me, they're a trilogy of records that are related that change, morph and develop the band's sound, it's not like it's a massive left turn. In our own way, we're trying to keep ourselves interested and push ourselves musically on each record - and define certain things that are different. "Bloodbuzz Ohio"

Did any of the work you and [twin brother] Aaron [Dessner] did with Dark Was the Night compilation have any impact on High Violet? I think so. It's always good for us, because we're a collaborative band, there isn't one principal songwriter - we work in this way and it's a bit-by-bit process where each person is developing part of a song or maybe Aaron or I write part of the music and give it to [vocalist] Matt [Berninger], and Matt will come up with the melody and [drummer] Bryan [Devendorf] thinks of the beat. It's a specific way of working, but there's quite a lot of room within that to reinvent things. Aaron and I, we're born collaborators as twins - we always played and wrote music together. We enjoy - for instance, when we recorded w/Sufjan Stevens or Aaron wrote a song with Bon Iver/Justin Vernon, or when I went and recorded with Antony [Hegarty]. Just seeing how other people make records and make music - it's really enjoyable, but it's also something that it certainly opens up new aspects of the music to us.

And even more than that, actually, some of those relationships we ended up with - like Richard Parry from Arcade Fire, who's really one of our closest friends, he actually plays all over the record. He was there several times while we were making it - again, cause our studio's behind my brother's house. We often had friends coming through town or friends over who would show up and just hang out for the day or hang out for the week and come in and try stuff, in the same way that we were trying stuff. That type of collaboration is exciting to us. I mean, Sufjan Stevens is another one who's our neighbor, he plays on a couple songs. We definitely learned from working with other people.

One of my favorite albums last year was the Mark Mulcahy tribute that you guys had a song on. How did you end up contributing to that? Specifically through Peter Katis, who's produced all of our records, who's good friends with Mark - they know each other back from playing in bands, in Connecticut. We had known [Mulcahy's] music, and when we heard about the tragic thing in his family, we were asked to contribute a song. I remember actually by the time we were involved, we were one of the last artists to finish our song, so the song we chose wasn't our top pick - but it ended up working really well, I thought.