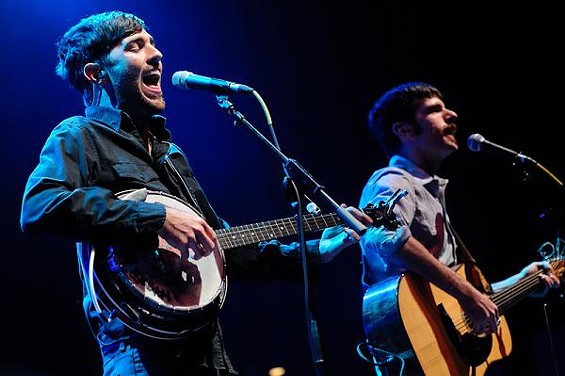 "I am a breathing time machine," Scott and Seth Avett sang at the very end of last night's show at the Pageant, passing the lines around like a bluegrass villanelle. After ten years and probably a thousand shows with a band that started as -- and has grown into -- a family, the Avett Brothers have a thing or two to say about what they've learned. In a full two-hour set that made sure the lyrics rose above the ruckus, the Avetts hosted a stomping celebration of life, love, death and music.

Click here for an entire slideshow of photos from the Avett Brothers/Grace Potter and the Nocturnals show at the Pageant.

Openers Grace Potter and the Nocturnals came out hard and fast with vamping, '70s-style rock. Led by guitarist Scott Tournet, the four-piece Nocturnals (though bassist Catherine Popper was noticeably absent), kicked into a funky blues riff that sounded as though James Brown might take the stage in a moment. When Potter strode onstage - half Tina Turner strut, half Stevie Nicks free spirit, all pipes and personality - she demolished any crowd resistance. After rousing first song, "Hot Summer Night," suddenly-awake audience members all around were asking, "Hey, what's the name of this band?" 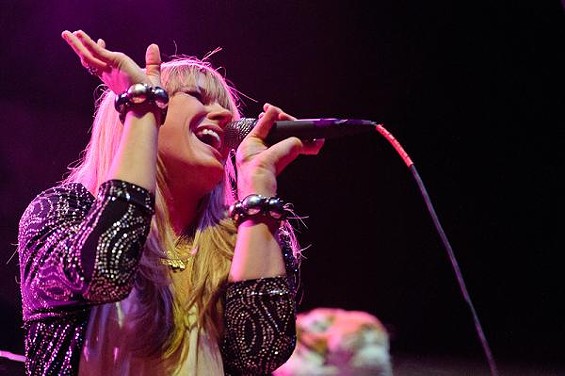 Potter held the crowd in her palm after that, sauntering over to her Hammond organ, spanking a tambourine or sliding on different guitars like wardrobe changes. Over swampy Heartbreakers grooves, she wailed about getting beaten down by love - though it was hard to believe anyone's ever got the better of this siren, except on the Rachael Yamagata-esque piano ballad "Apologies." Mostly Potter expanded into her bad gypsy persona, saying that she would be at the merch table signing "posters, CDs and tit-tays," dancing on her knees and stripping off her frilly dress to perform last song "Ooh La La" in her lacy - but fully covered - skivvies. "I couldn't play guitar in that," she said. Hook, line, sinker.

Though Grace Potter got pulses racing, it was first sight of four stringed instruments - cello, upright bass, banjo and acoustic guitar - that gave the crowd a straight shot of adrenaline. Scott Avett started off loud and clear, stretching bittersweet lyrics over the simple strumming of "November Blue," from 2002's Country Was. This old favorite set the tone - the band wanted to look the crowd straight in the eye, not hide behind the beefed-up production of major-label sensibilities. Next was "Salina," from 2007's breakthrough Emotionalism, a raw, twisty song that veers from near a cappella testimony to beat-box banjo breakdown to a lilting cross-country pastoral before its final downturn into Phantom of the Opera piano and cello strains. 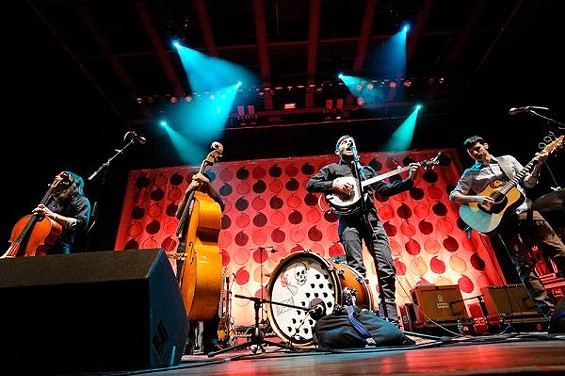 For the bouncy "Kick Drum Heart" -- the first of seven tracks to be played from 2009's I and Love and You -- the band was joined by drummer/Missouri native Jacob Edwards (ex-Samantha Crain and the Midnight Shivers). This allowed Scott and Seth, both short-haired and sporting mustaches, to stay up front. The Avetts' stage arrangements changed every song, as the band members switched instruments, Edwards and cellist Joe Kwon came and went, and bassist Bob Crawford got to swing around an electric bass like a member of the E Street Band. This versatility and pitch-in spirit define the Avett Brothers, the music feels gracious and honest as Scott's assured and sometimes tarnished voice and Seth's reedy, imaginative harmonies.

Late in the set, Scott performed Roger Miller's "Where Have All the Average People Gone?" over Seth's delicate acoustic guitar. Hearing this song erased any need to categorize the band - folk-punk, slam-grass, country-emo heart attack, whatever. These are plainspoken parables of dark and light, infused into traditional instruments and sent spinning and shouting. Take a second to look into the faces of an Avett Brothers crowd, and you will see mile-wide smiles, hands and heels in the air and even tears. It's the modern Americana, but it's more than that.

Critic's Notebook: Not enough can be said about this band's efforts to stay connected with its (now legions of) fans. As Crawford explained during our earlier interview, logistics have changed, but the value they place on fans has not. The Vintage Vinyl-sponsored pre-show signing and short set was an example of what the Avetts are doing whenever and wherever they can. The band members signed every poster and shook every hand in the half-full Halo Bar, and then played "January Wedding," "Colorshow" and "Famous Flower of Manhattan" with as much fervor as if they were playing Bonnaroo.

Absent from the set list were some crowd favorites - "Die, Die, Die," "The Ballad of Love and Hate," "Salvation Song," personal favorite "Weight of Lies" - but the Avett Brothers' catalogue has grown beyond the scope of even a two-hour set. Theirs is the kind of show that exhausts you to the physical and emotional core, but that if given the choice, would go on forever.

Encore: 1. Murder in the City (The Second Gleam) 2. Swept Away (Mignonette) 3. Laundry Room (I and Love and You)