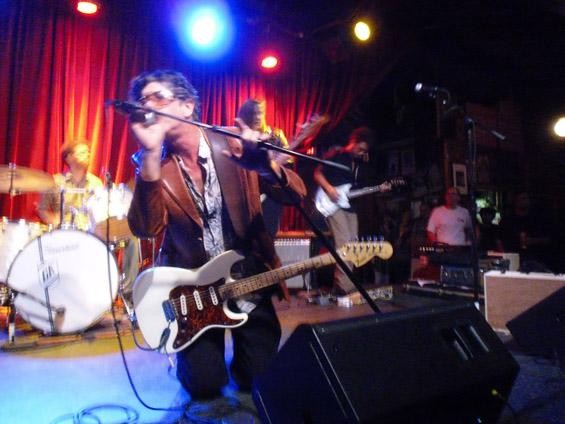 It's been a tough year for Big Star fans. In March, guitarist/singer Alex Chilton died - ironically, several days before he was to perform at South by Southwest with original members Andy Hummel and Jody Stephens. Then, four months later, Hummel died too. These twin tragedies arrived just as there was renewed interest in Big Star, thanks to Rhino's 2009 Keep An Eye on The Sky boxed set. Nonetheless, the songs endure -- and it's a testament to Chilton's catalog that even after four hours of cover songs, I was actually disappointed that I hadn't heard all my favorites.

The latest in a series of KDHX benefit concerts, "September Gurls & Boys" featured thirteen bands each performing three-song sets. KDHX has now produced enough of these tribute nights that everything ran smoothly. Bands loaded in and out in prompt fashion, no one exceeded their onstage time, the energy level rarely flagged and the whole thing kept to schedule.

When Chilton died, he'd clocked more than four decades in the music business, leaving behind a sprawling and confusing body of work. The man went through countless phases: the gruff-voiced teen idol fronting the Box Tops, the yearning proto-power-pop songsmith of Big Star's first two albums, the fractured and desperate voice behind Third/Sister Lovers, the guitarist for Tav Falco's primal Panther Burns, and the seemingly detached presence behind such overlooked solo albums as Like Flies on Sherbert and High Priest. This left last night's performers plenty of room to mold Alex Chilton in their own image, without significantly tinkering with the original arrangements.

Almost none of the three-song sets stuck to one era, and many of the bands took the opportunity to spotlight the more obscure corners of Chilton's catalog. The Jans Project unearthed 1980's Like Flies on Sherbert with "Hey! Little Child" and "My Rival" - in the process evoking the angular yet melodic approach that influenced so many '80s college radio favorites, from R.E.M. and the Replacements on down. The Remodels picked one Box Tops song ("Neon Rainbow," the B-side of "The Letter"), one Third/Sister Lovers song ("Kanga Roo") and one solo song (the college radio hit "No Sex"). That's twenty years worth of music in fifteen minutes; not a bad value at all.

When the bands did attempt to reinterpret the songs, the results were often intriguing. (When these experiments failed, they were at least over quickly.) Edward Burch rearranged "Lost My Job" and "Paradise," two tracks from Chilton's 1984 solo album Feudalist Tarts, with a country twang. Magic City vocalist Larry Bulawsky prowled the audience like a demented lounge lizard during "Take It Off," from 1987's High Priest. Most radical of all was Wormwood Scrubs' overhauls of "I Am The Cosmos" (technically a Chris Bell song, but close enough) and "Holocaust," both of which were nearly unrecognizable underneath screamy male-female vocals, discordant keyboards and squealing guitar. Most of all, the bands were audibly overjoyed to be onstage playing these songs. It would be an overstatement to suggest that Alex Chilton's spirit was in the room. But by the time Jimmy Griffin ended the night with a note-perfect solo version of "The Ballad of El Goodo," a stellar "September Gurls" and a raucous finale of the Replacements' "Alex Chilton," we'd surely heard a big chunk of one of popular music's premier catalogs. A wonderful night all around.

The Deciders: 1) When My Baby's Beside Ms 2) Nighttime 3) Thank You Friends

Wormwood Scrubs: 1) I Am The Cosmos 2) Holocaust

Beth Bombara & the Robotic Foundation: 1) You Get What You Deserve 2) Femme Fatale 3) Daisy Glaze