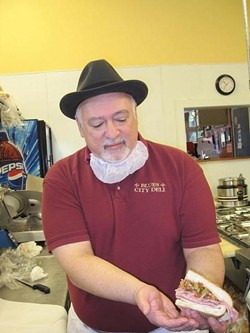 The Blues City Deli is celebrating its sixth year in business tomorrow with its third-annual free street festival. Dubbed "The Blues City Deli Streetfest 2010," the event is becoming one of the eatery/venue's most popular attractions.

"We always celebrated our anniversary around October 1," says owner Vince Valenza, "In 2007 we started to see the crowds growing to celebrate the anniversary, so we decided to bring it to the streets outside the deli in 2008. It was a real success."

The Streetfest's entertainment reflects the diversity of the local music community - and the range of acts the BCD books.The Funky Butt Brass Band kicks off the day at 11 a.m. with a New Orleans-style second-line parade, followed by locals Rough Grooves - featuring Rich McDonough, Eric McSpadden, Sharon Foehner, and Joe Pastor. St. Louis residents Preston Hubbard (ex-Fabulous Thunderbirds) and Joe Meyer will perform with BCD staples Felix Reyes and Dave Herrero (who hail from Chicago and Austin, respectively). The day ends with South Carolina-based guitarist Matt Hill -- Valenza says he'll "send you home thinking, 'Was that Jerry Lee Lewis on guitar?'...[he's] a real up-and-comer on the blues scene that's turning a lot of heads and has a very bright future." (The full line-up is here.)

"What I'm most excited about is how the old guard and the young blues performers are working together like family," he says. "Veterans like Eric McSpadden, Larry Griffin, John May [and] Jeremy Segal-Moss are always reaching out and welcoming and working with the younger players."

The Blues City Deli will be open and serving food, and it will also be grilling hot dogs, sausages and burgers outside. In the coming months, look for performances from the Chris Ruest Blues Band (October 2), Davina and The Vagabonds (October 18), Pokey Lafarge and The South City Three (November 4) and Nathan James (November 6).