Nelly Sweats Like a Celebrity, Hits the Billboard Top 10 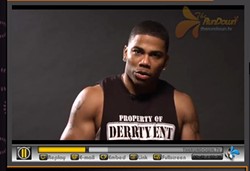 The end of 2010 is shaping up to be a good one for Nelly -- pun intended. He's gearing up to release a workout DVD titled Celebrity Sweat: Exclusive Sports Workout. (A teaser is below.) According to ESPN's Lynn Hoppes, Nelly's release is part of a larger set of fitness DVDs:

Nelly is one of the many celebrities and athletes who will be part of the fitness series, which begins this fall. The series will include the NBA's Carmelo Anthony and NFL's Chad Ochocinco.

"I know there are a lot of exercise videos out there, but this one is different because it's celebrities and athletes in their prime," said Nelly, who stopped by ESPN's campus Monday. "We will have music and behind-the-scenes looks for people to get into shape."