Meet Kella Macphee, the Photographer Behind the Bruce Springsteen Photobomb 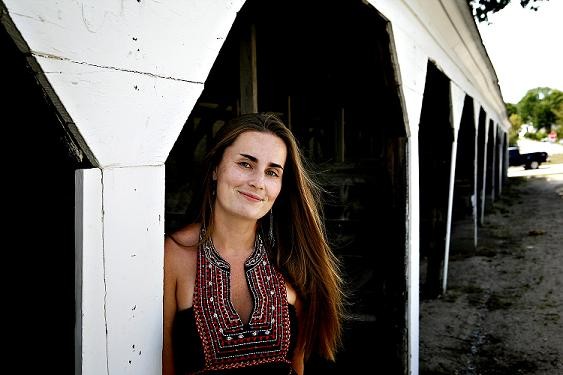 When Bruce Springsteen jumped into a shoot for a couple's engagement photos, he thrilled the couple and, as it turns out, the photographer, Kella Macphee. Macphee is a professional wedding photojournalist who's been at for five years -- "I shoot mainly weddings and fun portraits and the occasional rock star!" she laughs - who lives at the Jersey Shore (specifically, in a waterfront community in Brick). Little did she know that as she was documenting her friends' relationship, she was about to meet one of the biggest rock stars in the world. Macphee kindly took the time to answer some email questions about the experience.

Annie Zaleski: Where did the shoot take place? Who was the couple? Kella Macphee: The photographs were taken at Manasquan Inlet, a famous surf spot in Manasquan, New Jersey. The couple is Jen Smith and Ed Dwyer, they are good friends of mine and my husband, Chris, who was also there. They are getting married next month in New Jersey. Ed is a musician and had his guitar with him as a prop to serenade Jen for some pics. We also had a surfboard with us as a prop, but Bruce was not too interested in that!

I guess what everyone wants to know -- how did this happen? Did Bruce walk up to you, or to the couple? Did he introduce himself? Set the scene and describe what transpired. Basically, we were walking down the sidewalk along the water that leads to the beach -- it was me, my camera, Ed, his guitar, Jen, my husband Chris and Jen's brother, Scott, and [the couple's goldendoodles] Miles and Ella, [who are] named after the musicians. (Chris and Scott were the designated dog wranglers!) We were almost to the beach when my husband mouthed to me, "That's Bruce Springsteen." He was sitting with two buddies on the last bench enjoying the sunset. We all just sort of stopped and looked at him -- it must have been awkward because we were only a couple feet away! We could not believe it, it was him, just hanging out at the beach!

Bruce then said, "Let me see that box, play that thing." Ed immediately gave over the guitar and Bruce rolled up his sleeves and started strumming! I asked to take a few pics and he said, "Sure," and moved over for the couple to sit down next to him! He sang a bit about how they were getting married next month - [the] only info he knew about them! -- and that was about it. I took about ten pics and he handed back the guitar. We all shook his hand and he then got ready to leave and walked off in the sunset, with bare feet and his flannel shirt three buttons open! We walked onto the beach totally stunned finished up the shoot! When we left we could not help but tell everyone we saw what happened and they responded with, "Oh we missed him again." He must be there a lot!

What was your reaction as all this was happening? What was the couple's reaction as this was happening? We were all a bit starstruck. I mean, he is the most famous rock star ever and there he was in front of us sitting on a bench with sandy bare feet! We tried to play it cool and not act like groupies! Were you nervous to photograph him? I knew I had to ask him before I started shooting, and when he said sure I was completely at ease. He was so approachable and cool, made you feel totally welcome. I did keep my shots to a minimum -- [I] did not want to annoy the Boss!

How long did he stay and hang around for photos? What was he like as a photography subject? It lasted about five minutes or so, he may have hung out longer if we stayed and talked more! I wanted to get more natural and unposed shots. I'm not an obtrusive photographer, and so it was really fun when he started playing. He definitely had a presence about him, an ease and a coolness.

Are you a Springsteen fan? I am a fan, more so when I was a kid and singing "Born in the U.S.A." into my hairbrush, but how can you not love Bruce? We actually have this record framed on our living room wall -- right behind me as I write this! My husband saw him last year at the final show at Giants Stadium where he crowd surfed right over his head and he had a run in with him last season Christmas shopping, Chris held the door for him and his wife outside a Restoration Hardware in a neighboring town!

Anything else you want to add? Although the moment was only that -- a moment, lasting maybe five minutes -- it was truly a once-in-a-lifetime experience for all of us and a true account of what can happen at the Jersey Shore! Bruce walked off into the sunset -- he might be the coolest dude ever!