The Flaming Lips tries desperately to give more to its fans than it takes from them. It wants your emphatic applause, it wants your unconditional love, it wants your $37.50 - all fodder for creating an atmosphere that feels nothing short of magical. Wayne Coyne, Steven Drozd and friends left a sardine-packed Pageant full of grins, a few tears and pure-fucking-joy with all of their typical theatrics, some new tricks and treats and a high-energy show - enhanced immeasurably with but absolutely not reliant on balloons, confetti, streamers and giant hands.

After Ariel Pink's in-store performance at Vintage Vinyl, I wasn't sure what to expect of the band that in recent months I've discovered and admittedly grown somewhat obsessed with. (The band had been scheduled to perform - Pink showed up alone, ranting about how he didn't know why he was there or what he was supposed to do - "I guess I'll play some songs and then a fucking Q&A or something." He then performed a few songs a cappella and sans vocal effects, creating an interesting, entertaining and ultimately rather awkward eleven-minute spectacle. Go to a busy Target and shout, "Rape me, castrate me, make me gay. Lady, I'm a lady from today." You will then have a snapshot of what this performance felt like.)

View an entire slideshow of the Flaming Lips at the Pageant

Pink's lack of tact and concern for what his fans wanted to see earlier in the day thankfully was not a prediction of the group's performance later that night. Haunted Graffiti took the stage early and played an absolutely solid set, focused heavily on tracks from Before Today, Pink's first record with 4AD. The awkward moments were minimal, limited to Pink leaving his cell phone flipped open and wrapped around the microphone for the first ten minutes - he appeared to be mid-text - and answering a phone call between songs. Oh, and just a little bit of air guitar.

Haunted Graffiti's reverberated harmonies and hazy keyboards created the same lo-fi sound Pink's home recordings boast and Before Today reproduced. This seems to contradict the poppy, catchy hooks Pink churns out on the new record, creating the perfect atmosphere and preparing the crowd for the laser-pop explosion that is the Flaming Lips' live show. 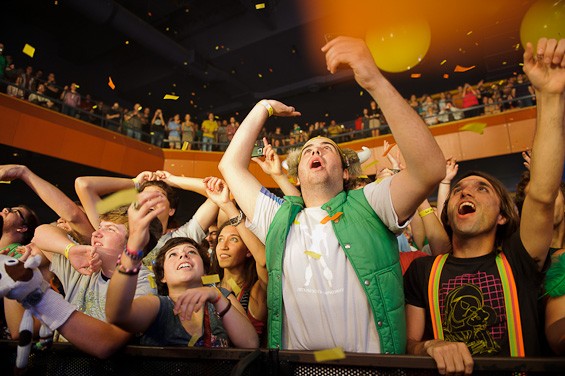 One of the reasons why the Flaming Lips' live show is so enjoyable (and the band itself is so lovable) is the "of the people" vibe it emanates. The members set up their own equipment and do their own soundcheck -- and setting up THAT stage was no small task. Aside from the many color-coordinated instruments -- everything was covered in orange tape/paint and the drumkit was transparent orange -- there are all of the other gadgets necessary to create the Flaming Lips experience, such as microphone cameras, dozens of strobes, two absolutely gigantic disco balls, a ball for Wayne to crowd surf in and a giant screen lining the back of the stage. Combined with Wayne periodically taking the stage waving and grinning during soundcheck, it seems to be true - the Flaming Lips love you as much as you love them.

The Lips' set opened with the band members emerging one-by-one from a door in the screen and walking down a ramp to introductions by Steven Drozd (who appeared energetic and well). Meanwhile, Wayne sat below the ramp enveloped in plastic, mid-inflation, and a dozen or so dancers dressed as Yo Gabba Gabba!'s DJ Lance Rock emerged, filling the stage's last bits of negative space with even more bright orange. Wayne then traversed atop the crowd in his infamous bubble while the rest of the band created some ambiance.

After Coyne emerged from his plastic bubble, the show really began, as those shows do - in a flurry of confetti, a shower of light and the intense atmospheric shift of a few thousand smiles electrified into unabashed grins. After someone in a bear suit appeared on stage and play-threatened Coyne, he sprang upwards and began the set mounted atop its shoulders. Half of the setlist was dedicated to Embryonic with the other half left for a couple of old standbys, some newer old songs from At War With the Mystics and the (according to Coyne's introduction) rarely played "Ego Trippin' at the Gates of Hell."

Audience participation is pretty essential to the Flaming Lips' live show, and as if the atmosphere and props aren't conducive enough to that affect, Wayne also demands it. Singing along is always encouraged, but "Yoshimi Battles the Pink Robots Pt. 1" was billed as a sing-along, and Coyne played it slowly on his acoustic guitar while Drozd softly sang backing vocals. The audience was also required to help drummer Kliph Scurlock fill in Karen O's parts during "I Can Be a Frog."

As Wayne said, waxing poetic before the second encore, the props are great, they're fun, and they bring out a childlike fascination and sense of play in the audience - but it's the audience itself that makes a Flaming Lips show. It's the ones who turn the confetti into "magic bits from out of a dragon's ass or something" (to paraphrase Coyne), bat at balloons like children, bask in the laser-light glow and sing to their hearts' contents.

As the evening ended to the tune of "Do You Realize," couples clung onto each other, parents hugged kids, some had a few tears in their eyes, and everyone, everyone sang along. The Flaming Lips have a way of turning something as simple as a rock show into something absolutely profound, absolutely unifying, absolutely pure. Maybe it's an act, maybe they do it because it's what people want, and yes, it's formulaic. But if you saw the look on Coyne's face as he sang those last lines of that last song, you can't tell me he wasn't bursting with genuine, reciprocated love for his fans.*

Setlists: Ariel Pink's Haunted Graffiti ? Flying Circles Getting' High in the Morning Beverly Kills One On One For Kate I Wait Bright Lit Blue Skies Menopause Man L'Estat (Acc. to the Widows Maid) Round and Round Fright Night (Nevermore) ?

*The Flaming Lips Worm Mountain Silver Trembling Hands She Don't Use Jelly The Sparrow Looks up at the Machine In the Morning of the Magicians Ego Tripping at the Gates of Hell I Can Be a Frog Yoshimi Battles the Pink Robots, Pt. 1 See the Leaves The Ego's Last Stand Pompeii Am Götterdämmerung Sagittarius Silver Announcement The W.A.N.D. Encore The Yeah Yeah Yeah Song 2nd Encore Do You Realize??