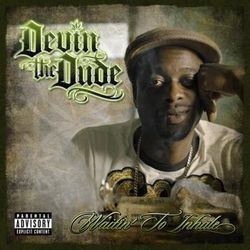 Given his underground status and relatively low profile (especially for a rapper), I wasn't expecting much of a crowd at last night's Devin the Dude concert. I was pleased - and frankly, a little surprised - to see that Devin pulled in a much larger audience than Bizzy Bone had managed to at the same venue earlier this year.

The show had plenty of warm-up acts, but surprisingly absent from the roster was Devin's crew the Coughee Brothaz. Openers included Bren Suarez, CKDK, the FuFops and Speekeezy. Local boys the FuFops had the standout set among them, with a setlist that hasn't changed much over the last couple of years.

The headliner came to the stage around 10:45, after announcing from offstage that he had to "roll something up." He wasn't joking either: He brought a hand-rolled cigarette [wink] onstage, lit it, hit it and passed it to the audience. The crowed loved it, and half of the front row can now tell their friends that they've smoked with Devin the Dude.

It's easy to see why Devin has such a loyal following; in addition to his natural charisma and feel-good rhymes, he seems down-to-earth in way that's atypical of successful rappers. He didn't share the stage with an entourage or a hype-man; it would've been contradictory to the mellow nature of his music. He has a knack for connecting with his audience through his easy-to-relate-to lyrics. The singer/rapper also likes to do a record scratch effect with his voice for a little added flair.

Devin covered most his better-known hits from his days with Jive Records, including "Lacville '79," "Do What You Wanna Do," and "Boo Boo'n." I would've liked to have heard "Fa Sho" from his debut album as part of the Odd Squad (now known as the Coughee Brothaz), but aside from that omission the set list was pretty satisfying. He performed the single "What I Be On" from this year's album Suite #420, and included his verse from Dr. Dre's "Fuck You."

Devin definitely lived up to his reputation as a "weed rapper," and someone even threw a baggie to him onstage to him while he performed "Doobie Ashtray." But THC isn't the only "substance" in Devin's verses; he showed that he can be inspirational with the track "Anythang," and that he can be both insightful and funny with "Almighty Dollar." As the chorus points out: "Almighty Dollar, it 'aint what it used to be, hobos used to ask for a dollar, now them mother fuckers ask for three!"

After roughly an hour of material, Devin ended the show. He was apparently caught off guard by the crowd chants for an encore; he returned to the stage to say thanks, but said he didn't have any more music ready.