Twelve Things To Do This Weekend: September 17-19 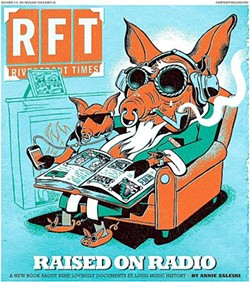 Summer's not over yet! There's still one more week (more or less) to enjoy the last gasps of carefree fun and outdoor hangs. Here are twelve good bets for the weekend -- of course, on top of the events we've already covered here and here.

Friday: 1. Ariel Pink's Haunted Graffiti at Vintage Vinyl Note: This in-store performance is now 5 p.m., not 4 p.m. See the LA psych-pop weirdos do their thing for free, since the Flaming Lips show (which they're opening) is hardcore sold out.

2. Bobby Bare Jr. with Blue Giant at Off Broadway Blue Giant is a twang-misted project featuring (among others) the members of indie-blues cracklers Viva Voce. Nashville rock eccentric Bobby Bare Jr released a new album, A Storm, A Tree, My Mother's Head, on August 31. 9 p.m. $12 to $15.

3. Devin the Dude at Pop's One of Houston's finest hip-hop exports headlines at Pop's, with fellow Texan Speekeezy along for the ride. Locals FuFops, CKDK and Bren Suarez also open. Doors at 7 p.m. $18.

5. Leslie and the LYs, with Gold Motel, more at Cicero's The PLAY:stl music festival continues all weekend at venues scattered around the Delmar Loop; view an entire schedule here. Space-age cult electro-hoppers Leslie and the LYs headline; Gold Motel, the new project from the Hush Sound's Greta Morgan, is also performing, as are Sleeperstar, The Saps, Holding Mercury. $12, but free with a three-day wristband. 11:50 p.m.

8. Wallpaper. at London Calling, the Gramophone Electro-funked party jams reminiscent of Chromeo and Kanye West? Check and mate, when talking about West Coast duo Wallpaper., which is performing at a special edition of London Calling. $4 before 10 p.m., $8 after

9. NiL-8 at the Firebird Springfield, Illinois, punks, who were a popular local draw in the '90s, venture South for a trip down memory lane. Scene of Irony and Ether Project open. $10. 9:30 p.m.

11. Farmer Jason Ringenberg, Off Broadway. Jason Ringenberg will be returning to town with cow-punk band Jason and the Scorchers on October 16 at the Old Rock House. But his children's music alter-ego, Farmer Jason, is doing a matinee for kidlets and their rocking parents this weekend. $8 in advance, $10 day of show. 3 p.m.