Clownvis Presley Speaks! The King of Clowns on America's Got Talent, Winning Over the Goo Goo Dolls and His Next National TV Appearance 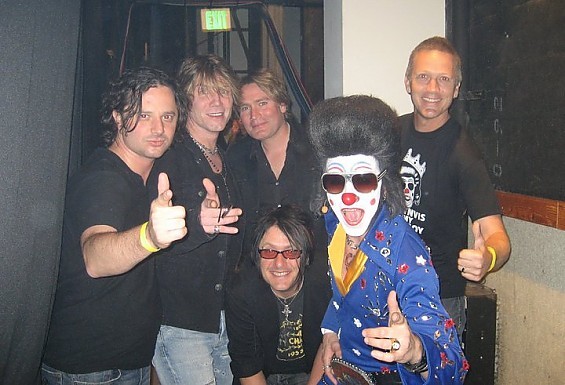 It's a tale as old as time: Clown insults The Great and Terrible Oz(zy) to his wife and as a result becomes nearly infamous, by winning over the hearts and minds of Americans everywhere -- including, but not limited to, the members of Goo Goo Dolls.

Or something. We caught up with Clownvis Presley to chat about his entrée into reality television. He has much love for St. Louis and his pal Amanda Palmer -- and he has some choice words for Sharon Osbourne. And don't forget, on Wednesday, the RFT's Chrissy Wilmes summed up Clownvis' second appearance on America's Got Talent.

How did you get the Goo Goo Dolls' drummer to wear a Clownvis shirt? Clownvis: He didn't even know I was going to be on the show that night. He emailed me, like Monday, just saying that he wanted a shirt but it was too late to order, so he was wondering if he could meet me somewhere because he wanted to piss off Sharon Osbourne. And I was like, Yeah man, I'm in the show, I'll just meet you on the lot. He said they all had a good time watching that first video over and over again.

How has your life changed since being on America's Got Talent? Do you have people coming up and razzing you in the streets now? So many people loved it, and then all these teenagers wrote in bad grammar, "Fuck you fag, you suck, die." I got a million emails like that, I sent them back positive messages about staying in school and studying and that, I told them to talk to school counselors if they have problems, stuff like that. A couple of them I just did long winded replies about how to get through puberty and adolescence and stuff. I remember what it was like to be a kid -- I don't hold it against them. But it's only helped me for the people who want to pay attention to me--it's been nothing but positive, you know, it's been great.

How did you get on the show the first time? They scouted me out in St. Louis. They had contacted a couple bars I performed at, they were contacting people asking for variety acts in town, and people pointed to me. They asked me to audition in St. Louis...listen, I would never in a million years try to go on a show like that. I'd seen the show once because I had some friends who were burned on there, and I was like, "Ugh, never man, I don't want no part of that!" I hate that stuff. My mom loved the idea of it -- [and] I was happy to do it because I knew my mom would think it was awesome.

I had every intention of going on there and really bringing it. I thought I could charm people and it would be all right and they would like it, but then they told me I couldn't do an Elvis song. I tried out with "Viva Las Vegas," with the whole act with my bodyguards and stuff, and they told me, "Cool, great, you're in, but you can't do Elvis, pick another song in three days." I don't want to say sabotage, but they told me to pick another popular song, if I were to do a John Cougar Mellencamp song or something it would change the whole dynamic of my routine, so I was like, all right, "Old McDonald." So I thought I'd go in there the guns blazing.

Why couldn't you use an Elvis song? They told me [it] was because of royalties. They were like, "Did he write that?" And I was like, "No, he didn't write any of them." But then again, you see people do Elvis everywhere all the time.

How did they approach you to come back for the show? Originally they wanted me to come back and they wanted me to cuss out the judges and they would just bleep it out. And they were paying me this time, so hell yeah. People that they brought back last night, it's not like they were the worst or anything. The guy that does the thing with his eyebrows; that's awesome. It's not a Vegas show, but it's awesome. Everybody has a place on that show, it's not just winners and losers. I almost backed out, once I heard we were just going to sing a Black Eyed Peas song in a friggin chorus line, I was totally going to bail. Then we rehearsed on it for like four days, and then by the end of it I'm like, it's kind of awesome. I didn't really have to do anything, you know?

Just show up and get paid, there's nothing wrong with that. [laughs] Yeah, and hang out with the flipping Goo Goo Dolls. Are you kidding me? The Goo Goo Dolls? Is Johnny Rzeznik's hair as well-coiffed in real life? Oh my God! I couldn't believe it. And his face and everything? What a chiseled man! They are some dudes, man, but how nice of them to be fans of mine, they came and scouted me out. That's their picture, they just emailed me that. I'm doing the drummer's Halloween party at his house.

Before the show were you warned to be nice to the judges or given any direction? anything like that? No, that's what was tough for me. It was surprisingly open. I kept saying, Man, I'm just going to flip off the judges, and if I don't get paid I don't get paid, at least I don't look like a tool or anything. But then you know, my wife told me not to, everyone told me not to, so I didn't do anything. They just kind of assumed everyone would play along. It was weird, straight-up live TV.

Clownvis' appearance with the America's Got Talent All-Stars:

You also have a couple of pictures with Amanda Palmer, how did you meet her She's great, I've known her since the Dresden Dolls first came to St. Louis, every time they've come through Clownvis usually does something with them. She was out here doing that Evelyn Evelyn tour and we got to hang out. She's great, man.

She seems awesome, I obsessively follow her and Neil Gaiman's relationship online. Yeah, she's like one of the only people I follow on the internet. Some people are good at doing that, you know, most of the people when I go online, I'm like I don't give a fuck. But everything she says is kind of interesting for some reason. Endearing, you know? She's very every man. And that's really how she is, I don't know how she has the energy, she's really "of the people" at every show.

So, since you're in LA now, the Freaker's Ball at Atomic Cowboy is no more? That's done, but I'm going to keep doing shows in St. Louis, I'm trying to work to work it out so I can bring it to a bigger venue and just bring the whole show up a notch. I am doing a monthly show out here now.

What's the response been from that? Are people digging it? Yeah, yeah. it's crazy, it's different than in St. Louis, where I was around for a long time. Most people don't know me personally, so it's just a character."

So do you miss St. Louis? Yeah! Every day man! I'll totally come back to St. Louis, I assume when I own a house it'll be in St. Louis, that's definitely where I'll lay my hat as they say. We're just running around while we can, it's fun.

What's next for Clownvis? I just filmed an episode of Judge Karen's Court on BET, she's like a sassy black judge. The thing with that is, it's just a case about Clownvis, Clownvis isn't on there. It's about him not getting paid for these birthday parties because they said he was drunk. In the end he ends up getting paid. And I actually won a thousand real-life dollars out of it. But it wasn't a real case! The producers made up the whole thing; they were looking for a clown with a dispute. I originally said I wanted to sue my buddy Narvil in St. Louis because I wanted to get them to fly him out here. They called me and were like, "Is there anyone in Los Angeles you want to sue?" So I called up another buddy out here and was like "Hey man, Can I sue you?" [The] season starts at the end of September and it'll be on a few weeks into the season."

Any final words for Sharon? I don't really care what she thinks because Geezer Butler's wife loves me! [laughs]

You can buy your own Clownvis shirt and find out more at http://clownvispresley.com