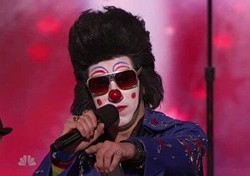 For those who were expecting or at least hoping for another exchange of words between Clownvis and the judges, prepare to be disappointed. After a montage of performers who were booed and laughed off the stage throughout the AGT auditions, said performers were invited onto the stage and introduced as the "America's Got Talent All-Stars."

Don't Miss! Our interview with Clownvis Presley in the aftermath of the show!

The all-stars included a lounge-style singer, a fire thrower, a chubby male stripper, a young man with a very flexible face, two singer/dancers and someone playing a giant guitar.

The group sang and danced to Black Eyed Peas' "I Gotta Feeling" and ended its number with a move toward the front of the stage and the unveiling of a banner reading "All Stars." The only mischief Clownvis had a chance to get into was giving Nick Cannon some bunny ears prior to the commercial break.

I would like to note that the top four contestants were no less gimmicky and no more talented than Clownvis - and in my opinion, they were less entertaining. (The other contestants were: Fighting Gravity, Prince Poppycock, Jackie Evancho, and my personal least favorite, Michael Grimm.)