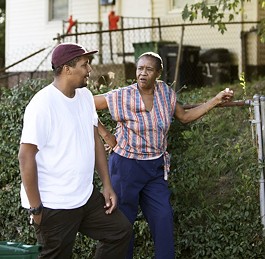 An apology is in order. This week's feature story profiling local rapper/producer/singer extraordinaire Black Spade contains a mix-up regarding where he grew up and got into hip-hop.

We reported originally that:


Spade's earliest forays into hip-hop consisted of sessions for young freestyle rappers on his block in Jennings. With lax supervision from his parents, he also spent a lot of time on the streets flirting with trouble.

"It's kind of a little-known fact about me," he says now. "When I was young and I didn't give a shit, I was wild. I would hang out in Jennings and just chill. Cops would just come up and rough you up. There was this one, he would come up and slap you if you didn't know your Social Security number."

But Spade called this morning to say in no uncertain terms: "I was born and raised in Pine Lawn."

The confusion was caused by the fact that Spade spent his time on Jennings Station Road in Pine Lawn, not the actual municipality of Jennings a few miles north. The online version of the story is being updated to reflect this correction and we will be running an erratum item in next week's dead tree edition.

Now then, if you haven't yet had the pleasure of hearing Spade's music, here's a little introduction.

Here is the video for his song "I Heart" off of his Build and Destroy mixtape released earlier this year and still available for free download over on The Smoking Section. The sample, you might recognize, is of the Beatles song "If I Fell," from their classic A Hard Day's Night.

Next up is another cut from Build and Destroy titled "New U." The hypnotic production is by J.Davey but the vocals are classic Spade. He's got his own vibrato-heavy style of singing, characterized by Vintage Vinyl owner Tom Ray in this week's story as, "a 21st-century jazz vocalist -- something between Donny Hathaway and King Pleasure -- with his rhythmic liquidity."


Moving into some of his older material, here is the video for the song "Evil Love" from Spade's classic To Serve With Love released by Om Records in March 2008. The record is described in the story as, "a shining example of Spade's ability to construct music that feels lived-in -- complete with vinyl pops and hisses -- but sounds brand-new." In this case, the sound is almost futuristic.


And finally, here is a jam from Spade's main side project Hawthorne Headhunters. The members of the group are Stoney Rock (Spade's producer alias), Coultrain and I, Ced -- all originally from St. Louis. The latter two now make their home in LA and Spade is currently with them on the West Coast recording the trio's new album.