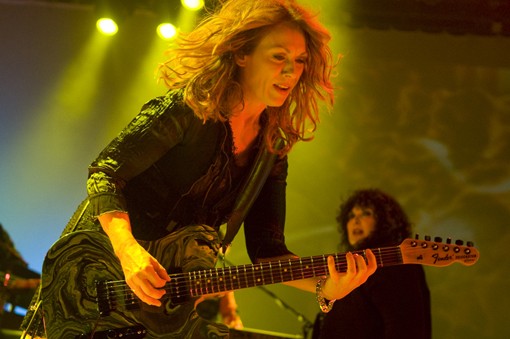 In preparation for this show, I borrowed a copy of The Essential Heart, perhaps the most comprehensive of the band's greatest-hits collections. Listening to it, I was struck anew at its rapid descent from '70s rockers to '80s power-balladeers. Granted, those '80s records were Heart's best sellers - but compare Nancy Wilson's gnarly whammy-bar intro to "Barracuda" with the billowy synthesized tones of "These Dreams" or "Alone," and you tell me which has more staying power. (Or ask the Decemberists, who did a great "Crazy on You" cover on their last trip to St. Louis.) Two different bands, almost.

Heart's new album, Red Velvet Car, suggests a return to its proverbial roots, so you'd forgive the band if they wanted to leave the '80s behind. However, last night's set at the Family Arena was - for better or worse - a combination of all eras, right up to the present. Or, as singer Ann Wilson put it early in the set, "a voyage through Heartland" that would require us to "open up and let our souls sing out." As it turns out, the voyage was fantastic at its beginning and end, but slow going in the middle.

After blasting introductory Pink Floyd and Beatles songs through the PA, the band opened with "Cook with Fire" from 1979's Dog & Butterfly. Right away, it was clear that Ann Wilson had lost none of her vocal power. She could still hit all the high notes like a female Robert Plant (which is more than the actual Robert Plant can say these days). Nancy was jumping around like she did thirty years ago, and their current band kept up admirably - particularly Craig Bartock, who did a fine job duplicating original guitarist Roger Fisher's signature lead work. Pretty awesome, in other words.

The band followed that up with "Heartless," and then it was on to "What About Love," the first appearance of the '80s power-ballad era. Heart actually did it justice thanks to Ann's strong voice and a stripped-down arrangement. "Straight On" and "Dog and Butterfly" followed, both of which showcased what was so unique about early Heart. For all of the band's early Who/Zeppelin influences, it also brought an airy folk subtlety to their songs.

A light joke about '80s fashion followed - "the corsets, the fake fingernails" - and then we were on to a mostly downtempo stretch. Yes, they played "These Dreams." And "Alone." (No "All I Wanna Do is Make Love To You," though.) To be fair, these songs were crowd-pleasers, and Heart performed them with emotion and conviction, but there's just no saving either of them from dentist-office musical hell. There were also a few songs from Red Velvet Car. The title track, backed by an Adrian Tomine-ish animated film, was stirring, but other new songs were uneven in their execution. Only "Even It Up" (from 1980's Bebe Le Strange) really lifted the mood, creatively incorporating its introduction and chorus from the Rolling Stones' "Gimme Shelter."

The treacly ballads ended with "WTF," an aggressive number from Car and probably the best of the new songs. From there, Heart could do no wrong. "Magic Man" was simply jaw-dropping. Even in 1976, it was one of the oddest songs on the radio: a trancy and meticulously arranged song with airy-fairy lyrics, stuttering drum work, slippery guitar solos and a Moog keyboard break that still seems beamed in out of nowhere. Only Queen's "Bohemian Rhapsody" stretched the boundaries of a mainstream rock single quite so far. Live, Heart nailed it completely, crazy Moog work and all. "Crazy on You" and "Barracuda" ended things on a suitably rocking note. The band came back for an encore of Led Zeppelin's "What Is and What Never Should Be" and an epic swing at the Who's "Love, Reign O'er Me."

Even during their lean years, the Wilson sisters have shown an admirable and stubborn independence, focusing on side projects such as Lovemongers when Heartland was closed for business. It's served them well for more than three decades now. I may not have enjoyed every song Heart played, but when the band was on, there was no denying the staying power of its best work and the bond it's retained with their audience (which ranged from grandmothers, to kids with their parents). Ann Wilson frequently used the word "love" to introduce songs and reach out to the crowd. Long may it reign over this band.

Encore: 1) What Is and What Never Should Be (Led Zeppelin cover) 2) Love Reign O'er Me (Who cover)