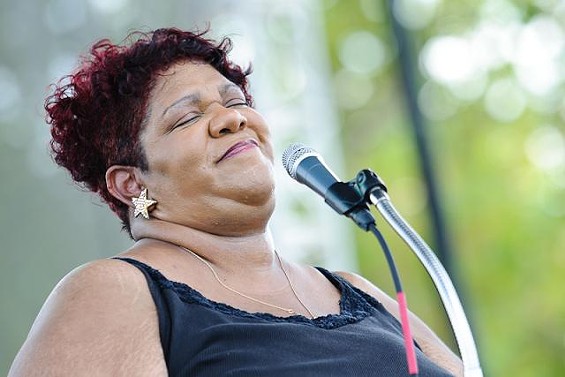 Now this was the kind of church service I could get into: Kim Massie opened up day two of Loufest with a relaxed Sunday morning set heavy on gospel and what she called "inspirational songs." After kicking off with a version of "Amazing Grace" that moved from slow and dramatic to uptempo jazz, Massie worked through well-known songs with notes of triumph: "When the Saints Go Marching In," "Don't Move the Mountain" and "Greatest Love of All."

Seated regally behind a music stand, Massie commented that the set list is just a "reference," and that her band, featuring Bob Walker on keyboards, could "read her mind" as to what she wanted to sing next. This ability to call the shots as she goes is part of Massie's power as a performer. With a full-bodied voice like hers it would be easy to wow a crowd with vocal bombast and ornamentation, but she delivers her standards with polish and complete control.

Halfway through the set, Massie began soliciting the small crowd for requests. The first wish fulfilled was "Feelin' Good," Massie saying she was inspired by the blue sky over the park. Her version was slow, steady and sublime, punctuating the pounding piano crescendo with "Good, good, good!"

Setlist: Amazing Grace The Saints Go Marching In Don't Move the Mountain I'm Looking For a Miracle The Greatest Love of All Feelin' Good A Closer Walk With Thee Oh Happy Day You Can Reach Me Best Thing That Ever Happened To Me Wade in the Water God Bless the Child (Billie Holiday)

Magnolia Summer introduced itself as a St. Louis band from all different neighborhoods. The band's lineup alone was a showcase in itself of local talent, as members onstage yesterday also belong to popular acts such as Grace Basement (Kevin Buckley) and the Bottle Rockets (John Horton). Plus, for the last four songs, Magnolia Summer was joined by the Funky Butt Brass Band, who also served as So Many Dynamos' go-to horn section at LouFest.

Armed with all the necessary elements - pedal steel, fiddle, multiple guitars - Magnolia Summer matched the sonic set-up of its most recent full-length, Lines From the Frame, and delivered a jam-packed set of tight country rockers. Chris Grabau's pleasing voice could take on a Drive-By Truckers vibe at times (though less nasal), as on third song "Short Wave Decline," when he sang over a string-laden guitar stroll.

The set started out at a thoughtful mid-tempo, but by mid-set, the band was opening up into songs with more power pop and rock energy. By the time Magnolia Summer got to Mellencamp-esque "To Better Days" and R.E.M.-reminiscent jangly/frantic "The Current Moves," John Horton's guitar was crunchier and the vocals more insistent.