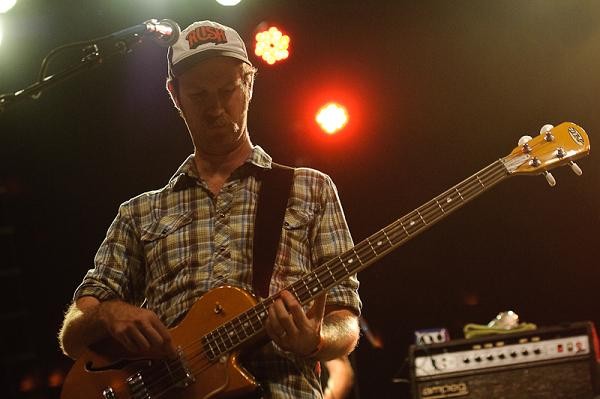 You never know quite what to expect from a Broken Social Scene show. Line-ups, setlists, how songs will expand or morph in execution -- these elements are anybody's guess. Two things you can count on from the Canadian indie super-collective, however, are spontaneous moments and a wall of sound.

The crowd only increased in enthusiasm as the festival day went from noon to night. Matching that sonic excitement, Broken Social Scene delivered the loudest set by any band of the day. From the moment all nine performing members took their places (eight were touring members, one was a local horn player recruited for the show), the all-encompassing sound was thump-thumping inside each audience member's chest. By the time second song "Stars and Sons" began, people were completely blissed out, swaying and fast-clapping.

During the next song, "Texico Bitches," Kevin Drew wiped out while jumping from the stage into the crowd. He bounced back and spent most of the jumpy, spacey track singing elevated in the crowd or standing on the barricade. For "7/4 Shoreline" the audience heard current female vocalist Lisa Lobsinger. Lobsinger, dressed in curls and looking like a hipster babydoll, is the lead singer of Reverie Sound Review, but she kept her parts understated and deferred to Andrew Whiteman on vocals. A few times, I would have liked for Lobsinger to belt it out -- but with Broken Social Scene, she was a team player.

Nearly every song received the extra-long treatment, with plenty of interaction between Drew and the crowd as well as with other band members. After a push-up exhibition (hard to see from where I was standing), Drew introduced a bobbing, warbling "Sweetest Kill," "because so many people break up on a Saturday night."

Well into the set, Drew held back the guitar corps, and with a few simple strums launched the crowd into a sing-along cover of Cyndi Lauper's "Money Changes Everything." Suddenly things were cut loose - the echo effect went way up, everybody with a guitar was having Fun With Amps, and it sounded like a Chuck Berry riff was buried somewhere in a big hot sonic mess. The frenzy onstage succeeded in producing an '80s-night frenzy in the crowd - and it wouldn't be the last time.

Broken Social Scene tried to wrap up its set in true collective fashion. The band recruited Airborne Toxic Event's Anna Bulbrook to play violin, added horns and Lobsinger on a snare, and let everything run wild around a central - dissolving and reforming - riff. The mad mess went on and on until its final, triumphant roar.

Then Loufest said the band had another fifteen minutes to play if they chose. Drew took it to the audience - fifteen more minutes or end it there? - and the choice was clear. Broken Social Scene played an encore - unexpected and super-sized as usual - and the people beyond the walls of Central Field went on dancing.