(A to Z has several writers and photographers covering LouFest. Reviews and photos of the other bands from the first day are in separate posts.) 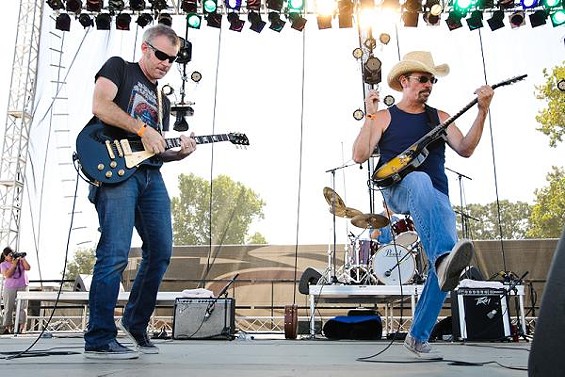 "These are the first musical notes of Loufest!" Brian Henneman crowed, and the members of the Bottle Rockets were off, igniting the first set of St. Louis' inaugural LouFest. The BoRox wasn't on the original bill, but stepped up when the Northwoods couldn't make it. After the fact, though, it's impossible to imagine the festival kicking off without the band, which served as a loud-and-proud rep for its hometown.

Bottle Rockets fans are great - and dedicated. The BoRox Twitter feed on Friday read: "Set your alarm clocks! Tomorrow, high noon, we will crank up the drums, crank up the bass, crank up the Les Paul in yo'face at Loufest! Noon, it's the new midnight! It's 5 o'clock somewhere! Have breakfast, come on down!!!" Before soundcheck began, about thirty people had heeded the call, filling in the sliver of shade at the front of the stage. The crowd quadrupled by the end of the set.

During the 50-minute, all-electric set, the BoRox burned through hard-country-rock classics. From a fist-pumping "I'll Be Coming Around," off 1994's The Brooklyn Side, to the defiant and funky "Hard Times," from 2009's Lean Forward, the band pulled from both ends of its catalog. During the highway-driving rocker "Indianapolis," Henneman said Jeff Tweedy - who performs Sunday - was part of the story that inspired the song: "He wasn't one of the 'boys at Firestone'; he was at the bar with me."

"Welfare Music," played second-to-last, was maybe the highest moment of the set. During the breakdown, Henneman and guitarist John Horton let their guitars have an intimate conversation over light military drum, whittling down into absolute silence in which Henneman sang, "Baby fall down, baby get up, baby needs a drink from a loving cup..." It was enough to chill the sweat rolling down your spine.

The BoRox did their best to make St. Louisans believe in the future of this event - and in the river city as a music city. "The more people come, the more we'll get to do this. Before you know, this'll be the new South by Southwest," Henneman proselytized. After a hometown set like that, with all of day one stretching out ahead, the crowd cheered. Why not? Anything was possible.

The crowd shuffled over to the Orange stage just as stephaniesid introduced itself: it's pronounced "Stephanie's id," as in "id, ego and super-ego." Such introductions were necessary for this small band out of Asheville, North Carolina, which was making its first appearance in St. Louis. The three-piece describes its sound as "pop-noir," and coming off the straight-ahead rock of the Bottle Rockets, the crowd was in for a bit of a jarring transition. By the set's halfway point though, though, both Stephaniesid and the crowd seemed to find its footing.

Stephanie Morgan fronts the three-piece and appeared yesterday as everyone's bouncy, theatrical little sister, with a guitar in hand and pigtails on top of her head. Morgan paired her grainy, jazzy voice with a lot of personality, hand gestures and exaggerated facial expressions. Her voice could shift in a breath from a quirky Regina Spektor purr to a hellcat yell that recalled a '90s Lilith Fair leftover.

​On "Drinking at a Party," Morgan kept her voice controlled over a low-building soundscape, courtesy of Chuck Lichtenberger on keys, bass pedals and backing vocals, and Tim Haney on drums. The best song of the set was "Cold Cold," when Morgan half-crooned, half-growled over a dusky repetitious groove. The jury's out on the scatting Morgan performed on other songs, but she was disarming when playing with extravagantly long gauzy fabric tied to her mic stand, and by the time stephaniesid covered the Dream Academy's "Life in a Northern Town," the crowd was feeling it - and not just being polite.

The Airborne Toxic Event has played more than 350 shows in support of its self-titled 2008 full-length debut, and this was its very first performance in St. Louis. After last evening's set of smart, cinematic indie rock and clear-eyed songwriting, LouFest-ers know what we've been missing.

The five-piece from Los Feliz, California, took the stage with "Wishing Well," an all-forward-motion song which sounds like an amped-up cousin of the National. Lead singer Mikel Jollett was clear and articulate, his mid- to low-range voice sounding at times like Matt Berninger's and, at others, as incensed as Conor Oberst's. The other members - Anna Bulbrook on violin, keyboards and tambourine, Steven Chen on guitar, Noah Harmon on bass guitar and upright bass, and Daren Taylor on drums - contributed to the energy on stage - switching instruments between most songs and playfully interacting with each other.

The band has spent the last several months writing and recording its second album, and it used this one-off performance to debut new songs, which sounded like solid, anthemic indie rockers. There were a couple of false starts in the beginning of the set, but Jollett, funny and appreciative, ingratiated himself to the crowd. (Big laughs for referencing the oblivious side-stage VIP section: "This is dedicated to the singles bar on my right.")

The two-song highlight of the set began with an unbelievably tender cover of Bruce Springsteen's "I'm On Fire." The sun sank, the crowd swooned. Then Bulbrook bowed the first wistful strains of "Sometime Around Midnight," Airborne Toxic Event's best-known song, and the crowd buzzed, softly echoing the lyrics.

The Airborne Toxic Event were a revelation to many show-goers who didn't know what to expect. And then there was the crew from Cape Girardeau (home of Rush Limbaugh and apparently the biggest Airborne Toxic Event fans in the state), who made their presence known as soon as they arrived - late - by pleading with Jollett to replay their favorite song "Wishing Well," which they had missed. Jollett respectfully declined, but didn't count out the possibility of hitting Cape on a future tour. Seems like that would go over well with new fans the band gained yesterday, as long as that tour stops in St. Louis.