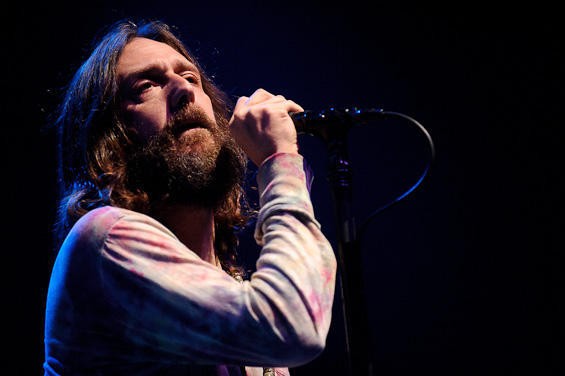 Bands tour beyond their expiration date far too often, with the end result that their legacy is tarnished or they become a parody of themselves. The Black Crowes, meanwhile, prefers to go on indefinite hiatus while in top form. That was obvious during its sold-out show at the Pageant last night, a marathon set featuring three hours of music.

As drummer Steve Gorman emphasized in our interview this week, the band's new acoustic album, Croweology, wasn't meant to be a sedate, anemic experience. That held true also for the first half of the show, an 80-minute acoustic set. Stripped-down didn't mean devoid of energy, from opener "Soul Singing" to the craggy "Sister Luck." The Crowes are genre excavators: Soul, blues, folk and rock commingle and cohabitate, with no regard for boundaries or trends. The band's a stubborn anachronism without being a musty relic.

That reverence for music history shines through during the Crowes' concerts, which is partly why it's such a popular (and reliable) draw. A cover of "Oh Sister," recognizable as a Dylan song immediately because of Adam MacDougall's whistling organ, struck a mellow note. "My Morning Song," always a live favorite, had extra energy and volume. The tune morphed from a raucous rocker into a religious revival and then back again - an evolution guided by Chris Robinson, whose hops, claps and full-body shakes made him appear possessed by a higher being.

"Wiser Time," introduced by guitarist/vocalist Rich Robinson with some Spanish-flecked guitar, was another early highlight. The Robinson brothers' harmonies - the kind of perfect and effortless harmonies only siblings can conjure - set a soulful tone; Chris' belting came straight from the gut. The song settled in and spread out, so that guitarists Luther Dickinson and Rich Robinson each had time in the spotlight for solos. The former's style was as flashy (and jam-influenced) as the latter's moves were understated (and working-man's-blues-inspired). 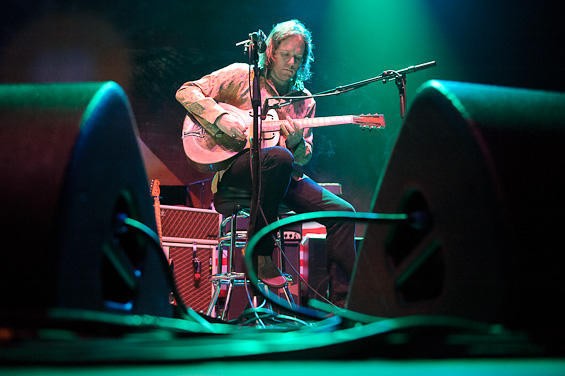 Dickinson, who's also in North Mississippi Allstars, was a pleasure to watch. His fiery intensity and talent livened up the music in general, but especially improved the group's many extended jams, including an epic one after "Ballad in Urgency." He was a good foil for magnetic frontman Chris Robinson, who's the kind of willowy, limber front man you just don't see anymore, a throwback to the heyday of Mick Jagger and Steven Tyler. Robinson's voice also sounded fantastic in all parts of his range, whether he was going for grizzled rock singer or soul growler. A cover of Joe Cocker's "Feelin' Alright" started the electric portion of the night. The brown-sugar soul felt more like an encore to the acoustic set, both in tone and arrangement: Chris shook a bundle of maracas as the Crowes' two backup singers layered on the gospel-soul. The loose-hipped boogie "Jealous Again" and the black-magic groove "A Conspiracy" followed -- but were only appetizers for the thunderous "Exit," on which Chris' powerful yowl filled the room. And Amorica's "High Head Blues," on which the band's love of Motown was most evident, showcased some sultry funk.

Years of constant touring have made the Crowes' jams and improvisations fluid and intuitive. The epic sprawl "Thorns Progress"/"Thorn In My Pride" came complete with a thoughtful drum solo from Gorman in the middle -- and took on a life of its own as it weaved in roadhouse blues, cathartic soul-bearing and pickled rock. And a cover of the Velvet Underground's "Oh! Sweet Nuthin" near the end of the electric set was just perfect. Chris strapped on a guitar and Rich took lead vocals; the latter's choir-boy-soft delivery had the perfect bittersweet air of finality in tandem with the snarling wall of guitar noise, which became louder and louder as the song unfurled. 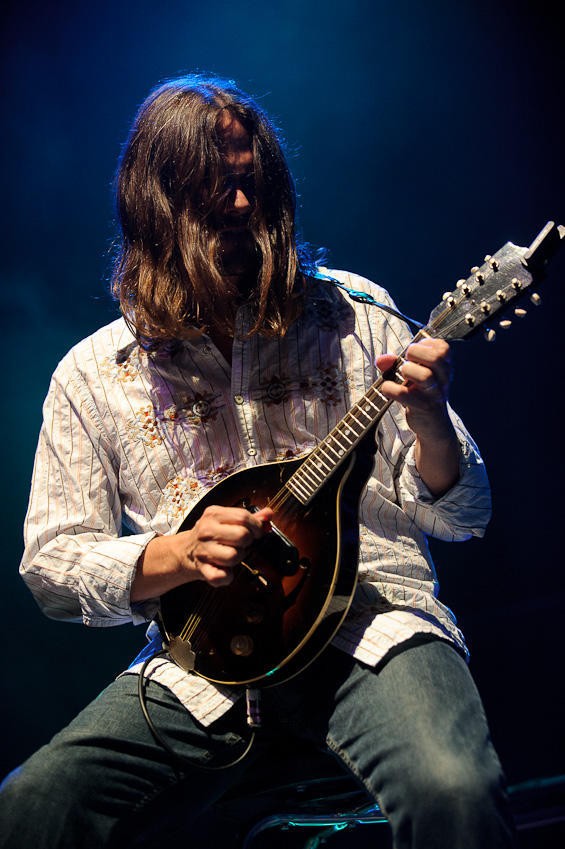 Both sets had lags in pacing - nothing so egregious that it killed the overall mood, but noticeable enough that they're worth mentioning. The lulls in the electric set in particular were more noticeable, perhaps because the band sounded so powerful when it harnessed and focused its collective energy on songs such as "Exit." (And it's worth noting that anybody not fond of the Crowes' acoustic side or penchant for jams might have been bored by the first part of the night.) But anyone who enjoys seeing live music - and enjoys seeing talented, expert musicians ecstatic at being onstage - would have no complaints about last night.

Critic's Notebook: Kudos to Chris Robinson, who chastised the crowd for talking during the band's acoustic set. (Seriously, the low hum of conversation in the venue was loud.) Before "My Morning Song," he called out the talkers for being selfish, among other things: "It's not just about you, it's about everyone else who shelled out good money to hear music. I hope what you have to talk about is so important." In other words, he verbalized what many concertgoers are often thinking. After the marathon performance of the song - which earned the band a standing ovation - he quipped, "Now, don't you feel better?"

Having no cameras flashing in the audience was strange - but also refreshing. People were dancing, waving their arms around and absorbing themselves in the music.

The Crowes are notorious for having completely random setlists; no song is guaranteed an appearance, not even the band's hits. That was true last night, although the song selection was about as close as to a "favorites" setlist as you get with the band. According to Crowesbase, "Oh Sister" was played for the first time since 1997.