(New albums are typically released on Tuesdays, i.e., today. What can you spend your hard-earned pennies on this week? Find out below. Post delayed a day due to server issues!)

*Chk Chk Chk [!!!], Strange Weather Isn't It !!! is known for its confusing name and danceable songs. Stream the new album here. Check out the video for "AM/FM" after the jump.

*Dead Confederate, Sugar Dave Simpson says of the new record, "Dead Confederate's second album owes much to Smashing Pumpkins and My Bloody Valentine, while Sonic Youth/Dinosaur Jr producer John Agnello shrouds the prerequisite vaguely troubling lyrics ("I was the quiet kid...") in soft grunge production. It's all epic, if slightly textbook stuff, but the title track and By Design conjure up a brooding menace rarely heard since Jane's Addiction. Giving It All Away adds Dinosaur Jr's J Mascis for authenticity, but actually sounds like sonic explorers AR Kane playing PiL." Listen to "Giving It All Away" via the Athens, Georgia band's Myspace page.

*Fantasia, Back To Me Music reviewer Melody Charles says of the new album, "Although some of the songs don't do her justice (there's the cloying 'Even Angels' and 'Who's Been Loving You' means well, but lacks conviction), it's moments like 'I'm Here,' from the Broadway musical The Color Purple, that make it clear how broad and beautiful her skills actually are. The lyrics, although sung as the character of Celie, seem to echo from within about the life she's lived and the losses she's endured----before and after celebrity---up until the present: 'I don't need you to love me,' she says with quiet clarity to those seeking to break her spirit. '...I got my house, it'll still keep the cold out. I've got my shawl, when my body can't hold out/I got my eyes, thought they don't see as fine now, they see more about how things really are now.'" Stream Fantasia's highly anticipated record in its entirety via its Facebook page.

*JJ Grey & MOFRO, Georgia Warhorse From No Depression's review: "The eclecticism of the new album is also keeping with the JJ Grey tradition, chronicled over the course of his four previous albums. The in-the-pocket, Memphis-style soul of "The Sweetest Thing," written around a horn line that was in Grey's head for days, contrasts with the stripped-down acoustic 12-string guitar work on "King Hummingbird." The hard-driving groove of "The Hottest Spot In Hell" speaks to personal experience as well as the heat of his home state. The constants are Grey's full-throated vocals, his funky-as-hell arrangements and his consistently great writing in the southern literary tradition." Stream Georgia Warhorse here. The band's playing Taste of St. Louis on October 1.

*Brad Laner, Natural Selections Joe Tangari says in his Pitchfork.com review, "Laner himself has described [the new album] as 'a simulacrum of what the band of my dreams sounds like.' He took his time making it, laying down tracks in between his responsibilities as a father and laboring over the details-- the work shows in the album's many intricately layered songs." Stream "Eyes Close" fromNatural Selections here.

*Mogwai, Special Moves [Live] The Pitchfork review of Special Moves says of the live album, "The stark, high-contrast black-and-white images presented by directors Vincent Moon and Nathanaël Le Scouarnec in Burning may have been intended as a visual analogue for the extremes Mogwai often favor in their music, but the song selection here provides the band with ample opportunity to explore the space between serenity and cacophony. What's especially impressive about Special Moves is how Mogwai deploy their few vocal tracks to alternately heighten and diffuse tension."

*Katy Perry , Teenage Dream Stream Teenage Dream here and check out the video for her chart-topping single, "California Gurls' below. 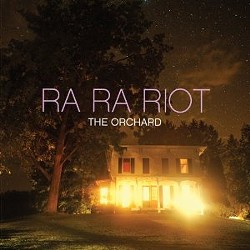 *The Sword, Warp Riders The San Francisco Weekly review says of Warp Riders, "If The Sword have evolved at all since their debut, 2005's Age of Winters, it's in that the riffs got a little raunchier and the weed a little headier: compared to the density of ideas and changeups here, the linearity of Winters sounds downright austere. Not even the late-album couplet of the title track and 'Night City' -- which could have been latter-day Def Leppard singles with the rhythm guitarist and drummer on steroids -- are content to rock out without dipping into a few experimental piecelets. What's with that Gregorian death chant at the end of 'Chronomancer II'? The hint of organ in 'Lawless Lands'? The sorry-you-died-but-put-in-another-quarter-to-battle-more-minotaurs outro at the end of '(The Night the Sky Cried) Tears of Fire'? Just what kind of stoner metal is this?" Stream Warp Riders via the Sword's Myspace page.

*Usher, Verses The LA Times review of Versus says, "Occasionally, Usher flashes why he remains on R&B's A-list. 'Hot Tottie' with Jay-Z is as intoxicating as its namesake. Bun B adds welcome grit on the Billy Ocean-homage 'Get in My Car,' and Justin Bieber earns the Tiger Beat covers on the 'Somebody to Love Remix.' Though the title of Versus may allude to his divorce proceedings, it holds a double meaning -- Usher's at his best in head-to-head competition." Listen to Versus via Usher's Myspace page.