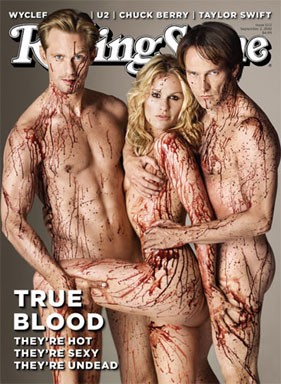 The latest issue of Rolling Stone is receiving more attention for its cover than for its contents -- perhaps it has something to do with the naked True Blood actors splattered in "blood." (See right.) However, anyone who doesn't flip to the articles might miss something rather astounding: a very long, very good interview with Chuck Berry. Author Neil Strauss traveled to St. Louis and met up with Berry at Blueberry Hill before a recent show, a meeting facilitated by Joe Edwards (who's mentioned quite a bit in the article). Although Edwards warned him that the interview could be short ("If he doesn't like you or is uncomfortable, the interview will probably only be five minutes"), Strauss and the music legend apparently hit it off. At one point, Berry says, "I can already feel that you're a very good interviewer, and these kind of interviews last a little while. We'll get into some things that I've been wanting to say for years!"

According to the article, the pair ended up talking for over four hours; Strauss even traveled to the Berry Park estate in "nearby Wentzville, Missouri" to see where he lives. (That's perhaps the article's only misstep; calling Wentzville "nearby" to St. Louis is a bit of a stretch.) Strauss doesn't shy away from talking about the 83-year-old's notorious reputation or past blemishes, but he does a good job explaining why and how Berry is the way he is -- and he's respectful of Berry without being salacious or exploitative. Among the nuggets we learn:

*Berry has an iPhone.

*He mows the lawn at Berry Park himself.

*He's working on new music. Although some are in the vein of Berry's influential style, several are a departure, described by Strauss as "highly poetic spoken stories...set to gentle atmospheric music more suited for a movie score."

*He's also been "collecting stories of his sexual escapades for a possible book."

*His recollections about his family are poetic and moving.

*He's portrayed as open, honest and rather funny.

The issue is on newsstands now.