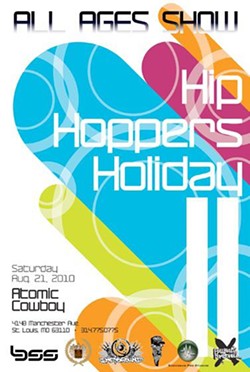 Shaun Bardle, a.k.a. Dr. Who, the founder/co-organizer of the Hip Hoppers Holiday event, planted the seeds for the fest several years ago. (Ever generous, he's quick also to give credit to his DJ/production crew the Basement Sound System - e.g., DJ Uptown, Mahf, Spec, Sircuz, Ben Bounce, Splitface, Deadasdisco, Qwest, Jaizen and DoubleAJent -- for its planning help.) After putting on a local show that functioned as qualifying pre-lims for the Scribble Jam -- a hip-hop festival known for its emcee, DJ and freestyle battles -- Bardle traveled to Cincinnati for the finals, and came away impressed.

"I have never seen hip-hop so alive, with such a diverse crowd," he says.

When Scribble Jam was canceled in 2009, Bardle decided to keep the collaborative spirit alive in St. Louis with a festival, dubbed Hip Hoppers Holiday. (Bardle notes that DJ Uptown came up with the name.)

"I really wanted a day for St. Louisans to celebrate hip-hop and the elements that created and keep its aging soul glowing, by showing off all the great local talent that this city has to offer," he says, "whether it be an emcee, DJ, breaker, producer, artist or skater."

Bardle's a familiar name in local promotion/DJ circles. He cut his teeth with a weekly night at Just Bill's called the Basement. Later, he moved the night to Atomic Cowboy.

"At first it was a chance to DJ outside my room," he says. "Then it turned into live performances. With the help of MySpace came the struggling regional and national acts trying to lay roots in St. Louis. I learned the art of [how to] network -- and kept networking, giving locals the chance to as well. If you keep adding foil to the ball, it's gonna get bigger." 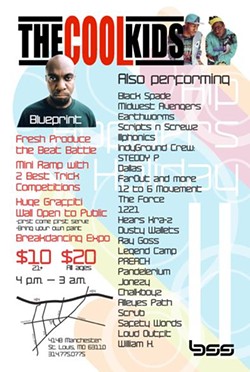 "Blueprint was a guy I really wanted to bring in since DJ Mahf had brought him in a few years back and circumstances beyond control forced him to cancel this past winter," he says. "The Cool Kids were also a top choice for a while now. Once again, I get by with a little help from my friends."

This year's expanded lineup, multiple stages and activities - which includes a graffiti wall, live breakdancing, a mini-skateboard ramp and a beat-production battle called Fresh Produce - reflect his high hopes for the future of the event.

"The goal for Hip Hoppers Holiday II is to grow," Bardle says. "Last year there were two "national" acts on the bill -- Raashan Ahmad, a West Coast guy that I had brought to St. Louis two times before and Black Spade, a local legend gone national. This year the main acts cover a broader fan base. [They're] acts that cover a wide spectrum of hip-hop.

"Hip-hop, like rock, has many different subgenres. [As the music expands], so do people's tastes. If one knows local hip-hop, it takes a quick look at the list of performers to see how the music I love has evolved. If one doesn't follow the scene, but recognizes the names of the Cool Kids and Blueprint then attends Hip Hoppers Holiday II, it's their chance to experience it head on."

The festival starts at 4:30 p.m. and it's all-ages. Admission is $10 for 21-plus, and $20 for those under 21. Bardle notes that the graffiti wall is "first come, first serve" and says that people should bring their own paint and "respect other artists and their space." The main outdoor stage will be on the rocks, so he stresses "comfortable shoes." And if parking's an issue, he says that the Commerce Bank one block east of Atomic Cowboy is a smart bet,.