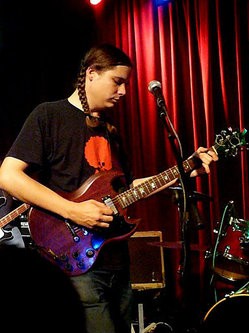 In the weeks following the hit-and-run car accident that claimed the life of Fattback's Dave Hagerty and injured his girlfriend Ellen Cook, the local music community has continued to lend its support to help defray medical costs.

This evening, beginning at 5 p.m., CJ Muggs in Webster Groves will host a raffle and bake sale to aid in Cook's recovery. The raffle's highlight is a 1996 Fender Stratocaster signed by Paul Rodgers (of Queen and Bad Company), which was donated by Dave Hinson of Killer Vintage Guitars. Those who wish to donate to the cause can do so here.

On next Saturday, August 28, Off Broadway will host a benefit for Cook and Hagerty featuring several local acts. Jason Hutto's new band Warm Jets USA will perform, alongside Beth Bombara and Paul H. Alpert. Additionally, the benefit show will feature a reunion of sorts for Rats & People, as the band temporarily sets aside its silent movie scores and performs songs from its highly literate folk-punk past. The show begins around 9 p.m. and there is a suggested donation of $10.

The Daily RFT reports today that police have identified a suspect in the August 1 car accident. 38 year-old Fermin Jantes is still at large. Anyone knowing of his whereabouts is asked to call CrimeStoppers at 1-866-371-TIPS.