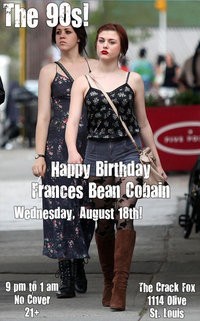 Music fans of a certain age, prepare to feel very, very old. Frances Bean Cobain - the daughter of Courtney Love and Nirvana's late singer, Kurt Cobain - turns eighteen today. Yes, that's right -- the cute little peanut seen in picture after magazine picture back in the day is now legal. She can buy lottery tickets and cigarettes (if she chooses) and is officially an adult. (BTW, you can prepare to feel even older next year, when Nevermind turns 20 years old.) To celebrate her legality, come to the Crack Fox starting at 9 p.m., as it holds a free, '90s-themed night. Says the Facebook event page: "Join DJ 486 and friends for a night of grunge classics, birthday cake shots, and more!" And although it's 21-plus, no doubt Frances Bean would be allowed in if she happened to show up. NOTE: Not that she's going to; let's make that clear.