As might be expected, fans of every age, shape and color came out to witness last night's performance by one of the biggest musical acts of the era. For anyone who's familiar with Black Eyed Peas' music, the show at the Scottrade Center didn't disappoint: It was a spectacle of mass proportions with chart-topping songs and sky-high production values.

Related content: Photos from will.i.am's DJ set at Lure after the concert

Opening for the pop mega-group was everybody's favorite "Rappa Ternt Sanga," T-Pain. After a brief disclaimer about his tight shirt and slight cold ("Y'all might see some mucous tonight, or a little snot or something!"), he went into a half-hour set that included solo hits ("Buy U a Drank") and his more notable features (Kanye West's "Good Life," Flo Rida's "Low"). He also threw in his verse from Lonely Island's "I'm on a Boat" (an SNL Digital Short), which I thought was a good call. It's worth mentioning that although Auto-Tune has been T-Pain's signature sound up until this point, he seems to be scaling back on how much of it he uses during live performances.

After the intermission, the headliners made their grand entrance by ascending from the stage sporting over-the-top, sequin-covered costumes. (will.i.am wore a conductor's jacket, and Fergie looked as though she'd just finished shooting the Tron sequel.) As they lead off with "Let's Get It Started," there were enough strobe lights and camera flashes to send the faint-hearted into an epileptic seizure. They followed up with "Rock That Body," featuring several dancers which I can only describe as "autobot speakers." The absurdity was far from over.

The group took full advantage of the various platforms protruding from the main stage, while a multitude of video screens displayed eye-catching graphics during the show. The set also featured a ton of moving platforms, laser and smoke effects, and costume changes. Although Black Eyed Peas' music is largely electronic, the group featured a live band on a raised platform towards the back of the stage, and will.i.am showcased his versatility by playing both a keytar and a baby grand piano. 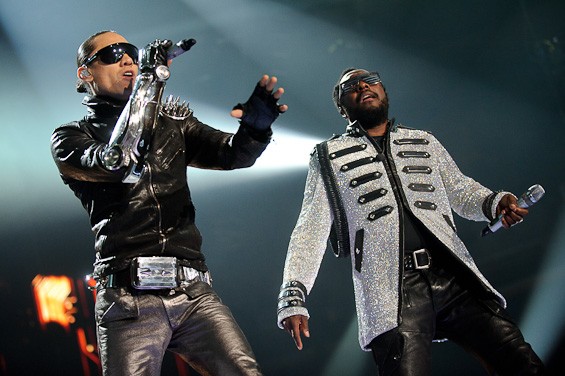 At one point, Will performed a so-so freestyle that was loosely based on fan BBMs that were being broadcast onto the screen. The funniest of which read: "Kid for sale, $5. Pick up out front." (Sadly, this one didn't make it into the freestyle.)

Each member of BEP had their own segment for a solo performance. Taboo's was the show-stopper, as he was lifted high above the crowd on a motorcycle. Fergie performed some of her solo material, ("Fergalicious," "Big Girls Don't Cry") and will.i.am worked the turntables (dressed as a robot) in a set that included Michael Jackson, Nirvana and Journey.

Black Eyed Peas played all of its biggest (post-Fergie) hits, such as "Imma Be," "Where Is the Love?" and "Pump It." The encore consisted of "Boom Boom Pow" and "I Gotta Feeling," as well as a lengthy outro thanking each backup dancer and band member.

Critic's Notebook: I would be remiss if I didn't mention that BEP is moving further and further away from its hip-hop roots in favor of the more lucrative electro-pop genre. Any fans that were expecting to hear classics such as "Joints and Jams" were left high and dry.