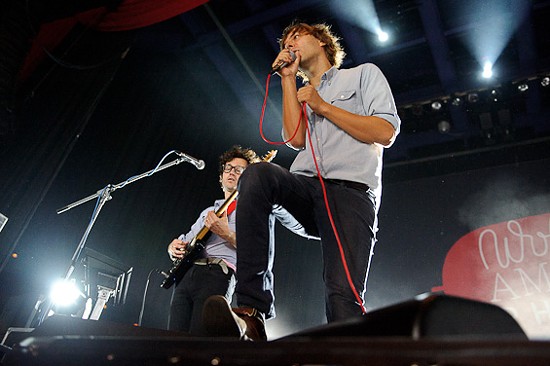 In one of a half dozen instances of audience acknowledgment, Phoenix vocalist Thomas Mars announced, "Growing up in Paris, we clapped like this." Mars commanded The Pageant to applaud to the rhythm of "[pause] clap, [pause] clap-clap" -- the complete inverse of the traditional American "[pause] clap-clap, [pause] clap" pattern (think "That Thing You Do"). The sold-out crowd obliged; it was just one example -- alongside the set list, light show and songs themselves -- of the Parisian group's propensity for embracing rock and pop clichés as springboards for the unexpected.

Phoenix introduced the element of surprise early in its set. A sample of the eerie instrumental "Love Like A Sunset Part I" faded in through the PA system while each of the six members -- the band's core four, plus touring drummer Thomas Hedlund and keyboardist Robin Coudert -- manned his individual station. The track was interrupted when Hedlund, backlit in dramatic white, launched the band into the hyper-shuffle fan favorite "Lisztomania." Crowd-facing strobe lights announced the song's first post-chorus rock-out, serving as the official "it's on" moment of the show.

The band's economical 85-minute set largely focused upon its Grammy-winning 2009 release Wolfgang Amadeus Phoenix; a massive reproduction of the album cover's pink hydrogen bomb logo was the only constant prop on stage. The band treated tracks from Wolfgang with extreme care, neither parroting the recorded arrangements nor ignoring their essential elements. Rather, the already lively songs proved to be ever-evolving organisms; Phoenix consistently altered structures, inserted unexpected fills, accentuated tensions and glorified releases. 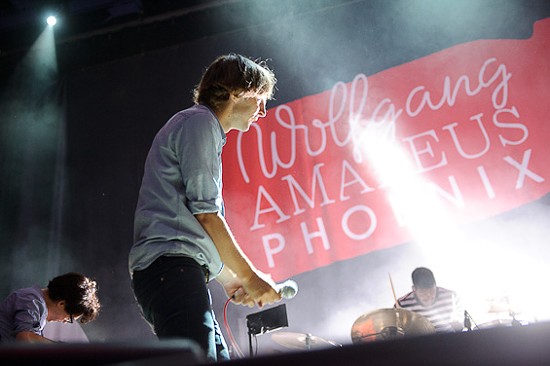 ​Hedlund wasted no time segueing from aforementioned album opener "Lisztomania" into the polyrhythmic intro of "Lasso." A pair of tracks from Wolfgang predecessor It's Never Been Like That, "Consolation Prizes" and "Long Distance Call," followed, functioning as nods to the band's diehards and bathroom/beer breaks for its fairweather fans. An intentional commentary on this polarization or not, "Fences" became the mid-tempo party jam to unite both camps of Phoenix's fan base.

After raucous applause, Phoenix went Wizard Of Oz on The Pageant. Its monochrome
white-light-on-black-stage dynamic blossomed into technicolor with "Girlfriend," as bold swatches of basic Crayola 8-pack shades enveloped the band. Later, the sharp conclusion of "Armistice" cued a giant white curtain to fall between the band and audience. Acid-trip swirls of light trailed across the cloth, making ominous shadows of the band while it snuck into the previously suggested "Love Like A Sunset Part I." As the beat dropped, so did the curtain. The sextet (with Mars playing dead on his back) was illuminated only by horizontal red lines scaling upward like a poorly transmitted television channel. "Sunset"'s four-on-floor kick drum spurred on more crowd convulsions, and the red streaks glaring upon the ocean of jazz hands and spirit fingers resembled flames. 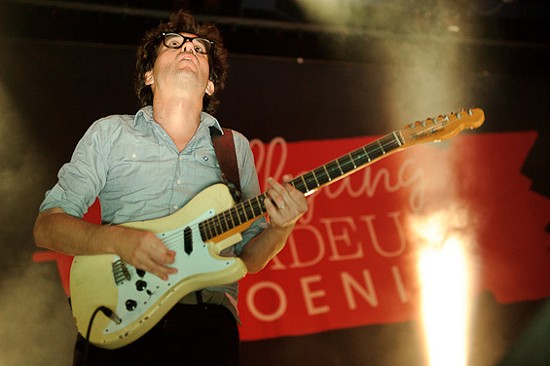 ​All the big rock show moves were earnestly presented; the gradual transformation into an
arena-caliber performance echoed Talking Heads' Stop Making Sense. The band members seemed intently focused upon their execution while still letting loose when the songs called for such behavior. Guitarists Christian Mazzalai and Laurent Brancowitz shared a similar presence: Telecasters strapped on a few inches too high, sporadic stiff-legged spasms. Bassist Deck D'Arcy was more reserved, although his holding-down-the-fort stance occasionally gave way to electric slides across stage. The pair of borrowed guns were noticeably energetic; keyboardist Robin Coudert utilized his lengthy dark hair by headbanging, and Thomas Hedlund stood up from his drum kit at every opportunity. Thomas Mars carried on a swagger not unlike The Strokes' Julian Casablancas, often leaning against the mic stand or casually wandering the stage.

But while the lethargy of a character like Casablancas is sometimes viewed as arrogance, Mars' moments of inactivity reflected a sort of humility. At various points in the set, he seemed to be pausing to soak it all in: the power of the band's songs, the palpable energy in the smoke-free air, the fact that he and five fellow Frenchmen can sell out a venue in a city they've never been to on a Monday night.

Phoenix ended its set, predictably and righteously, with "1901." The buzzing new wave track sounded fantastic and felt even better. After its standard running time concluded, Laurent Brancowitz led a slowed-down recap of its chorus while Mars, tethered to stage by a ridiculously long glow-stick orange mic cable, entered the audience half crowdsurfing and half walking on water WWJD style. The band was certainly milking its encore-within-an-encore, but only because nobody -- band or audience alike -- wanted the evening to end. Naturally it did, but only after the crowd returned Mars to the stage for one last "Thank you St. Louis!", a brief reprise of "Girlfriend," and a classic punk rock mic slam.

Toro Y Moi, project of Chazwick Bundick performing as a synth/bass/drum trio, opened the evening. Its set inspired head nodding and toe tapping rather than the gyrations its
attempted rave-ups suggest. Marketed as followers of the "chillwave" movement, the band displayed odd resemblances to 90's radio staples like Paula Abdul's "Straight Up Don't Tell Me" and MTV's Jock Jams compilations. Not bad, not great, Toro Y Moi (which, in a bastardized French/Spanish hybrid, means "Bull And Me") failed to prove worthy of its coveted opening slot. At best, the trio's synthetic disco throwbacks were an inoffensive digital counterpoint to Phoenix's analog organicism.

Love Like A Sunset Part I (for real this time)

If I Ever Feel Better