*Black Label Society, Order Of The Black According to Randy at The Official Metal Show Metal Blog, "Wylde has shown that a true musician doesn't need to use performance enhancers (in the form of booze or drugs) to create great art. All you need is practice, songwriting ability, and some personality to make a truly brutal album." Listen to the group's eighth album here and see if you agree.

*Bottomless Pit, Blood Under The Bridge+ Blood Under the Bridge is the Chicago indie rock band's sophomore album, and you can check out its first single here.

*The Budos Band, The Budos Band III Daptone Records has a knack for neo-soul with bite. Budos Band III couldn't be described much better than this: "If the menacing album art, which features a cobra primed for the attack, is any indication of the music itself, we can expect an all out assault of the senses, with a tendency towards the venomous and psychedelic."

*"Slip Away" by Kathryn Calder

*Sarah Blasko, As Day Follow Night Alex Silveri reviewed the album for Sputnik Music, saying "While the truth is that it doesn't always hit the highs that Blasko has proven herself to be able to muster in the past, As Day Follows Night marks itself as being Blasko's most charming record yet, trading intensity for a light step that will leave an impression on whomever it touches."

*"Cracks in the Armor" by Killola 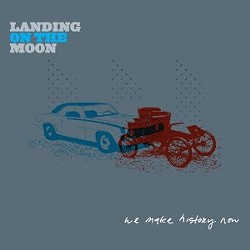 *Landing On The Moon, We Make History Now Louie from the Frontloader.com says of the album, "Guitarist/vocalist John Klemmensen explains that (Grubb) really tried to turn up the pop with us, which is most likely the reason why the album has such a crisp sound for what is considered to be an indie-band. After spending some time with the record, I have to say that I like this quality... for some reason, I rarely attach "indie" with the word "crisp." It's refreshing to hear when I do come across it." Stream We Make History Now via Landing on the Moon's Myspace.

*Mike Posner, 31 Minutes To Takeoff Listen to 31 Minutes to Takeoff in its entirety on Myspace.

*Eli "Paperboy" Reed, Come And Get It! Chris Rizik from Soultracks.com says of Reed's new album, "While Come and Get It risks coming off as contrived and derivative, the pure joy that Reed and company put into the disc makes it work. The album is hip enough to be heard in college dorms and legitimate enough to be rocking AARP meetings." Listen to tracks from Come and Get It! on Eli "Paperboy" Reed's Myspace.