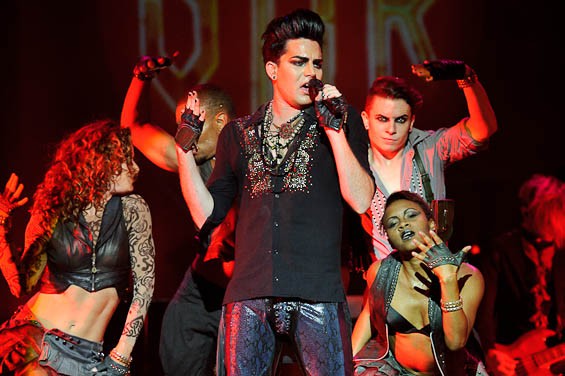 American Idol's taken a beating this year. Besides the usual drama with its judges, interest in the show appeared to be dwindling. In fact, its results-show finalé drew its lowest ratings ever. Perhaps what Idol again needs is a personality like Adam Lambert. The season eight runner-up lived up to - and exceeded - expectations at the Pageant last night. Glam, disco, synthpop, rock, goth and dancepop collided in a well-executed, enjoyable show. And like any smart performer, he left a very sold-out crowd wanting more.

After an airing of the recorded version of "For Your Entertainment," the title track of his debut, Lambert appeared atop a set of stairs wearing a top hat and long coat, à la Johnny Depp's Mad Hatter character from Alice In Wonderland. (His lacquered pompadour, however, screamed "rockabilly" or "Morrissey.") He strolled down to the stage, and opened with the alluring synthpop freeze "Voodoo," a cross between Duran Duran and Sade. Things picked up with the Eurodisco techno romp "Down the Rabbit Hole" and a riotous run-through of the Lady Gaga-co-penned disco vamp "Fever." The latter featured Lambert and his four back-up dancers showing off slinky dance moves and impeccable choreography.

Entertainment has songwriting or production credits from the usual Top 40 suspects, including Pink, Linda Perry, Max Martin and OneRepublic's Ryan Tedder. But the rock edge of Entertainment is almost more impressive: Lambert's also singing songs penned by Muse's Matt Bellamy ("Soaked"), Darkness vocalist Justin Hawkins ("Music Again") and Weezer's Rivers Cuomo (who gets a co-write on "Pick U Up"). And Rob Cavallo, who's known for his work with Paramore and Green Day, also produced several songs. With so much talent on the album, it's of course seamless and professional -- if not almost too perfect at times.

However, Lambert's use of a top-notch live band loosened up the arrangements and delivery. Drummer Longineu Parsons was in Yellowcard and comes from a musical family, while keyboardist Camila Grey is in electropop cult faves Uh Huh Her. Guitarist Monte Pittman, who had plenty of chances to unleash killer metal solos, is in the hard rock band Prong and tours with Madonna. (In fact, he even taught her to play guitar.) Androgynous bassist Tommy Joe Ratliff, whose blond chop and makeup made him look like an ex-member of the Cure, quietly and steadily anchored the tunes.

These musicians ably handled operatic goth-glam ("Sleepwalker"), a Def Leppard-meets-'80s-funk hybrid ("Sure Fire Winners") and a hi-NRG gay-club anthem ("If I Had You"). "Soaked" indeed sounded exactly like a Muse song, from Lambert's vocal delivery down to the classical piano flourishes throughout. (It made a solid argument that Lambert should star in a revival of Phantom of the Opera.) Again unsurprisingly, the histrionic glam-pop highlight "Music Again" sounded like a Darkness outtake, complete with Lambert emulating the high shrieks for which Hawkins is known. A steamy, psychedelia-swirled cover of Johnny Cash's "Ring of Fire" split the difference -- it sounded like Muse making out with the Darkness in a dark closet. And the throbbing synthfunk stomp "Strut" featured vaguely raunchy -- but snap-to-a-grid fierce -- dance routines based around canes.

Yet Lambert has a chameleonic quality which hints that he's not just a one-trick novelty act. As a mid-set breather, he perched on a stool for an acoustic-based version of mega-hit "Whataya Want From Me." The song "Aftermath" also featured acoustic guitar and some almost Timberlake-ian vocal moves. The encores focused on songs he covered on Idol: Tears for Fears' "Mad World," unadorned and sincere, proved a contrast to the heavy seduction of Led Zeppelin's "Whole Lotta Love."

While he's openly gay, Lambert is the kind of pop star that's just sexual, regardless of his personal preference. (He did lightly kiss bassist Ratliff, but it was more playful than it was exploitative.) His pants ranged from "tight leather" to "form-fitting" - and for the second half of the set, he sported a sleeveless shirt with a glittery "A" on the back. (An inverse scarlet letter?) He oozed confidence as he strut across the stage and pleased the screaming crowd with plenty of crotch thrusts, full-body shudders, fluid footwork and synchronized high-steps. The only real misstep was his banal stage patter, which felt canned and contrived.

Lambert likely wouldn't have found such a huge audience had he not been on Idol. (His fanbase probably wouldn't have been as diverse, either: The crowd's ages ranged from elementary school to grandma, with a special emphasis on soccer moms and teenage girls.) However, he's been acting and performing for years before he was on TV, and it shows: Lambert's a natural, lithe performer with an impeccable sense of rhythm. This bodes well for his future career prospects, because he's already very comfortable on stage being, well, there for your entertainment.

Allison Iraheta, a fellow American Idol eighth-season runner-up, opened the show. She looked the part of a rock star, with long reddish hair, a form-fitting black-and-white dress and kicky boots. Unfortunately, her performance felt like she was simply playing the part of a rock star; she didn't quite inhabit the ferocious front woman role. When she sang and strutted around the stage simultaneously, her hard-rock-clouded voice wavered and went hoarse, as if the material wasn't quite suited to her vocal range. A cover of Pat Benatar's "Heartbreaker" also felt like a reach. The cumulative effect was "diluted Heart."

Iraheta sounded more confident and solid during the moments she veered toward musical theater or smoky blues-rock, or when she stood still at the mic to sing, as she did for "No One Else." Perhaps due to familiarity, the raucous single "Don't Waste the Pretty" also went over well. The set ended with the Sounds-resembling single "Friday I'll Be Over U," which again was somewhat wobbly. Iraheta's still young - just eighteen - and so her stage awkwardness likely comes from inexperience more than anything. Hopefully, she'll find her own voice in the future.

Adam Lambert Setlist: For Your Entertainment Voodoo Down The Rabbit Hole Ring of Fire (Johnny Cash) Fever Sleepwalker Whataya Want from Me Soaked Aftermath Sure Fire Winners Strut Music Again If I Had You