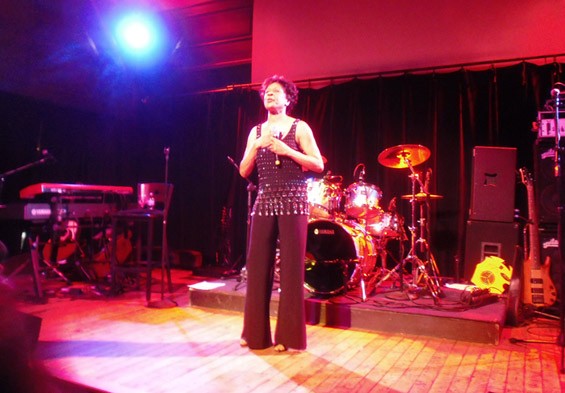 The greatest living interpretive singer last appeared in St. Louis at the Sheldon Concert Hall in September 2009, on an evening that found her before a rapt and packed house, basking in a recent Grammy nomination and surveying a career - "the struggle," she calls it - that began in 1962, and which should have ended at just about any mile marker or tombstone or broken promise along the way.

Last night was different, less nostalgic - the oldest song selected from her catalogue was "A Woman Like Me," dating from 2003 - but astonishingly more hungry, bold, forward-looking, theatrical and witty than that exhilarating Sheldon set.

The performance by Bettye LaVette didn't surpass that night - as fine a room as the Old Rock House is, the acoustics are no match for a concert hall, and the turnout (150 tops) was disappointing - but she and her finely tuned band played as if another mantle of awards waited for them at the end of the night.

After a brief blues warm up, the band brought the singer in from "back stage," AKA the patio, to the opening riff of the Beatles' "The Word," the first and funkiest cut on this year's album, Interpretations: The British Rock Songbook. Sheer black slacks; a sleeveless, black, sequined top; heels of some kinky stomping addict's dream; and diamonds flashing on her fingers - she looked like a personal trainer out to take on the glitterati, who were no where to be found. The 64-year-old singer has more groove in her quadruple-jointed shoulder blades than a battalion of Lady Gaga dancers. She's all sinew and muscle, like the sound of her band, who never lay back into easy rhythm and blues background music. The singer is so far ahead, that they can push as hard as they want and never come close to catching her.

Song 2, "I Still Want to Be Your Baby (Take Me Like I Am)," from 2007's Scene of the Crime, kept the hard groove together, ending with an air guitar solo from LaVette, then slipping into the night's first emotional tableau, "Isn't It a Pity," introduced with a recognition of St. Louis as one of her first tour stops when she was only 16 and a sense of relief at having a label, Anti-, who would release 3 of her records in a row. Played as a dirge, George Harrison's "Isn't It a Pity" becomes a harrowing, soul-and-humanity-searching soliloquy for a great actor who knows what the words demand and finds whatever is inside, or creates inside, to make them stick like flechettes.

That's what it's like seeing and hearing LaVette on stage. There's as much method acting, as much Adler or Brando, in her uncontrolled grimace and scraped-to-blood-and-bone moan, as there is pure inventive, interpretive singing. And there's so much of that: "Don't Let Me Be Misunderstood," even with an acknowledgement of Nina Simone, is almost unrecognizable, brilliantly so, with staccato phrasing on the refrain, and a heady backbeat. Some songs you might want to plead with her not to try; say, for instance, "Nights In White Satin," which couldn't possibly work, no matter how fucking good she is. It does work, rising on keyboard strings and a glorious howl of a simple "I love you." LaVette admits she initially didn't know what do with the song; so she sung it for her daughter.

So it's a show and not a show, a performance but not a gig, a relentless working out of art, that elusive thing between nature and artifice that slips out in "a senior moment" when she sits down on the stage and digs deep into Elton John and Bernie Taupin's "Don't Let the Sun Go Down on Me," and then springs back up for Led Zep's "All My Love," delivered as a pure battle cry. The night closed out with a quartet of interpretations from the "young Brits": Ringo's "It Don't Come Easy," the Who's "Love, Reign o'er Me" the Stones' "Salt of the Earth" -- which demonstrated that LaVette can even turn social consciousness into instinct - and Clapton's "Why Does Love Got to Be So Sad." The singer retired briefly to the patio, then returned for an encore, the frequent set closer "I Do Not Want What I Haven't Got," sung, as always, a cappella.

"The bread of life is mine," she sang, and the texture of each syllable could chill your soul.

The Word
I Still Want to Be Your Baby (Take Me Like I Am)
Isn't It a Pity
They Call It Love
Don't Let Me Be Misunderstood
Nights In White Satin
You Don't Know Me At All
Don't Let the Sun Go Down on Me
All My Love
A Woman Like Me
It Don't Come Easy
Love, Reign o'er Me
Salt of the Earth
Why Does Love Got to Be so Sad

Encore
I Do Not Want What I Haven't Got