This Just In: St. Louis Bluesweek Festival and new Blues Hall of Fame Announced for Downtown 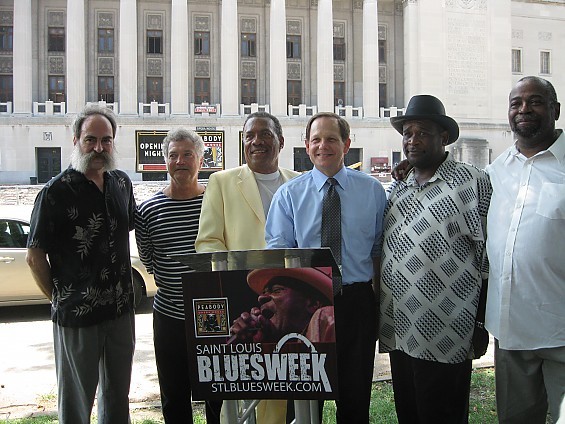 St. Louis blues legends and enthusiasts turned out this afternoon for an announcement about a new blues festival and a Blues Hall of Fame for downtown.

"St. Louis wouldn't be the same without the blues," said Mayor Francis Slay. "Music permeates the city; it's an integral part of life in St. Louis."

The ten-day St. Louis Bluesweek festival kicks off August 27, and will feature performances from local blues notables such as Skeet Rodgers, Marsha Evans and the Bosman Twins, as well as blues workshops, a Soulard blues bar crawl and the First Annual Blues Awards. The festival is being spearheaded by Mike Kociela of Entertainment St. Louis.

"I knew after talking to him [Mike Kociela] that we needed to make live music a big part of the brand for downtown St. Louis," says Maggie Campbell, a recent St. Louis transplant and president of the Partnership for Downtown St. Louis. "So over the last year, we've been working hard to integrate live music and music offerings into many of the things we're doing downtown.

"And now with the Peabody Opera House coming to life, and with this blues entertainment and educational complex coming alive, downtown St. Louis could actually be reaching its tipping point," she continues. "St. Louis is now joining the ranks of cool cities like Nashville and Austin and Memphis, cities that have built upon their rich cultural heritage of music, where in every one of those cities that energy has fueled creativity and commerce."

The Blues Hall of Fame, which will be located at the Mercantile Exchange, has only been in the works for four or five days, according to Kociela.

"We're working together with Spinnaker St. Louis to launch [the Hall of Fame] at 6th and Washington," he says. "It's amazing, this is going to be such an amazing tourism driver for our city to have an actual hall of fame. I'm amazed to be able to say that because this is going to bring us back to the forefront of being the leading blues city in America, and I truly believe that we are."

Adds Mack Bradley, representative of Spinnaker St. Louis, the development firm who proposed the hall of fame idea to Kociela: "There are certainly lots of details yet to be worked out, but we didn't have to spend a lot of time thinking about it to figure out it's an idea worth pursuing."

Kociela said nothing is confirmed yet, but tentative plans are in the works for the hall of fame to include classrooms for blues education, a venue, bar, recording studio and office space for the St. Louis Blues Society, in addition to the hall of fame itself and blues museum.

Kociela said the two festivals are totally different animals, and the organizers did not consider combining the two celebrations of St. Louis's music history.

"St. Louis has a pretty big appetite for blues music, there's plenty of blues fans to go around," said Bradley.