Review + Setlist + Photos: Something Corporate is Reunited -- And It Feels So Good -- at the Pageant, Wednesday, August 4

To most people, the name Something Corporate means absolutely nothing. To a music fan of a certain age, however, the name Something Corporate brings back a flood of memories and induces dewy-eyed nostalgia. Scene darlings at the turn of the century, the Orange County band matched pensive piano with chugging guitars, which ensured that it never fit in neatly anywhere. The band's been dormant for a half-decade now, but vocalist/pianist Andrew McMahon has remained in the public eye as the leader of Jack's Mannequin.

Still, fans have long clamored for SoCo's return - and so they met last year's announcement of a reunion with open arms. (And wallets: The Pageant was sold out last night.) As the strains of Peaches & Herb's schmaltzy song "Reunited" began -- McMahon later jokingly described the song as being "from a new band" - the band strode onstage and launched into "I Woke Up in a Car." Although a bit wobbly, the set recovered with the power-pop surge "21 and Invincible" and the plaintive "Me and the Moon," two songs McMahon still performs with Jack's Mannequin.

The vocalist stressed in a recent interview that this reunion tour wasn't going to be experimental; in fact, it was going to be a show for the band's fans. That was certainly the case: The well-paced setlist included nearly every essential song in SoCo's catalog - from the no-brakes lite-punk "Hurricane" and slo-mo scrape "Fall" to the quivering midtempo rocker "She Paints Me Blue" and the measured pop roar "Space." A smattering of lesser-known songs -- highlighted by the b-side "Watch the Sky," an incendiary run-through of "Only Ashes" and the Christmas song "Forget December" - added levity. "Wait," which featured Partington and others on acoustic guitar, was another nice addition.

The show had a casual, storytelling vibe, as McMahon reminisced about the origins of and meanings behind songs. Before "The Astronaut" he told a story of writing the song during sessions for the band's debut, Leaving Through the Window, in a studio next door to where Tom Petty & the Heartbreakers were recording, and how meaningful that time was. McMahon also mentioned how much he enjoyed playing at the Pageant and acknowledged lyrical albatrosses - in other words, the fan-favorite "Konstantine," the encore's anchor. The performance this night, which started with McMahon solo at the piano, felt like an intimate hymn full of confessions and catharsis. 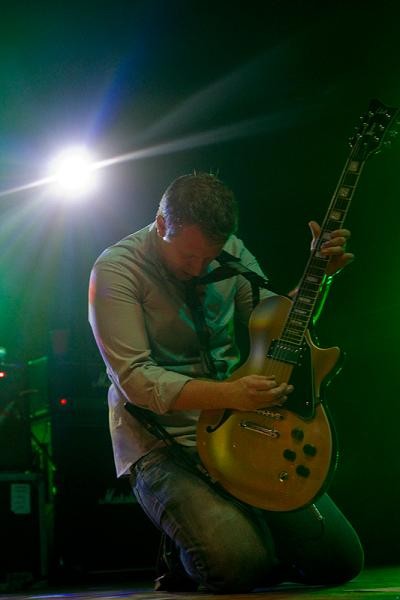 While SoCo's studio albums were polished and buffed - especially the sophomore effort North - the reunion tour wisely relied on the energy created by a live band. The youthful McMahon, looking like a prep-school student in a plaid shirt and neatly cut blond hair, strutted around the stage with confidence when he wasn't attacking the piano. Guitarist Josh Partington pumped up the crowd by doing goofy little dances; guitarist Bobby Anderson was just as animated on the opposite end of the stage. Sunglasses-sporting bassist Clutch and drummer Brian Ireland were a silent, steady pair, as is the rhythm section's wont.

Before a lovely version of "Cavanaugh Park" - a waltz which shifts between soaring piano and crashing guitars -- McMahon said he wrote the song when he was seventeen, "and in some fucked up way, it still makes sense to me - and I'm 27." That statement explains the band's enduring appeal - its themes of loneliness, homesickness, nostalgia and longing are timeless. But it also likely explains why it was never more popular: SoCo was light years ahead of its time, insightful and smart in ways that uber-mainstream bands rarely are. The only way that its material felt dated was in its rhythms; they often had a slight hip-hop groove, a trait of so many rock bands in the late '90s.

The biggest problem of the night was the venue's sound; everything was cranked so high that songs sounded muddy. But it's a minor quibble for an otherwise solid reunion show. Memories and nostalgia always loomed near -- but the music onstage didn't coast on the past. Something Corporate played like a ferocious rock band with something to prove, even if its young-and-hungry, scrappy days are behind them.

Encore: "Konstantine" "Forget December" "As You Sleep" "If You C Jordan"