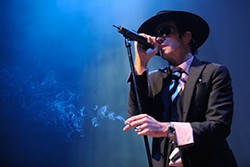 Although Family Arena hasn't yet put this show on its website -- which means, yes, it's still not 100% confirmed -- tour dates swirling around put the reunited Stone Temple Pilots at the venue on September 30. The opener, via an email I just received? Black Rebel Motorcycle Club. (That sound you just heard was the jaws of BRMC's long-time fans hitting the floor.) It'll be interesting to see how the STP tour goes, especially after the trainwreck that was Scott Weiland's show at the Pageant a few years ago. More than that, though: Nostalgia for these '90s bands doesn't necessarily translate to ticket sales -- or interest in new music in 2010. STP released a new, self-titled record in late May, and a little over two months later, the singles from it, "Take a Load Off" and "Between the Lines," are only getting light airplay on the Point (105.7 FM) and KSHE 95 (respectively). The album, meanwhile, didn't appear to be in the Billboard Top 200 album chart last week.