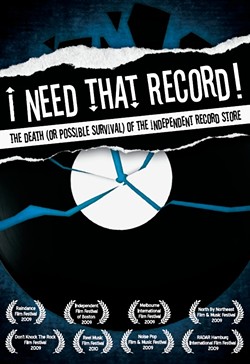 Before there was an iTunes "store" and torrent sites, the record store played a vital part in thousands of people's lives -- a church for the sinners.

For some this hasn't changed. But by and large, people have fetishized record collecting in this digital age. Contextualize this within the current economic situation, and watch as traditional shops close, often to the despair of the surrounding community. The disappearance of record stores has made us miss them. The nostalgia has proven productive, though, as dozens of films, books and even a holiday have been inspired by it.

People document record stores in every imaginable way. Some simply share stories of individual stores -- a tale which often ends with the store closing. Some explore record-collecting. Some try to communicate what record stores are and what they represent. Sadly, others tell the greed-soaked tale of why many record stores have gone under.

One of the more popular films, I Need That Record!, was actually a National Record Store Day release. It was featured on Pitchfork, and boasts interviews with Thurston Moore, Mike Watt, Ian McKaye, Glenn Branca and more. You'll find the trailer below, along with trailers and clips from ten other shop docs.

*I Need That Record! trailer

*Sound it Out: High Fidelity With a Northern Accent trailer *The Final Days of Full Circle Records in its entirety (the embedded video below is the first scene -- click on it to view the rest).