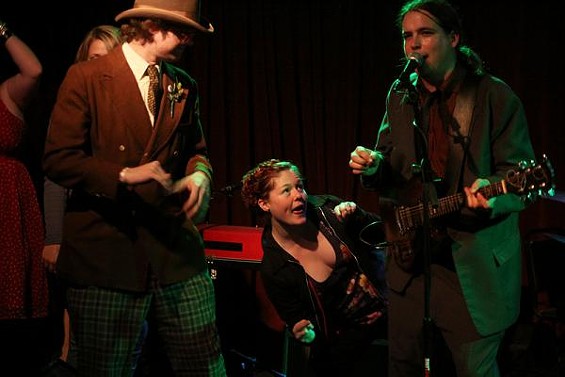 [Update, 1:50 p.m.: Joern confirmed to me that Hagerty passed away this afternoon. I'll update the post with visitation and funeral arrangements when they're known.]

[Update, 8:41 p.m.: Deer Tick is planning to donate a portion of the proceeds from its Thursday night Off Broadway show to a memorial fund for Hagerty.]

Terrible news to report from over the weekend: Fattback guitarist/vocalist Dave Hagerty and his girlfriend were involved in a car accident early Sunday morning. According to an article about the accident in the Post-Dispatch, it was a hit-and-run at the intersection of Manchester and Kingshighway; police are looking for the other driver.

At the moment, Hagerty is in a coma and on life support, says Fattback's drummer/vocalist, John Joern. "Other than that, we don't know much." He added that Hagerty's girlfriend in "stable condition with a broken arm and other minor injuries."

Joern notes that Hagerty is one of the co-hosts of the Venice Café's Monday open-mic nights. Tonight at around 9 p.m., the venue will be hosting an "informal gathering of friends, to put our thoughts in toward Dave," he says.

Our thoughts here at the RFT are also with Hagerty, his family and his friends. Fattback released its most recent EP, EEE PEE, last weekend at Off Broadway.