Interview Outtakes: Chris Shiflett on His Guitar Heroes, Being a Dad and the Status of Foo Fighters 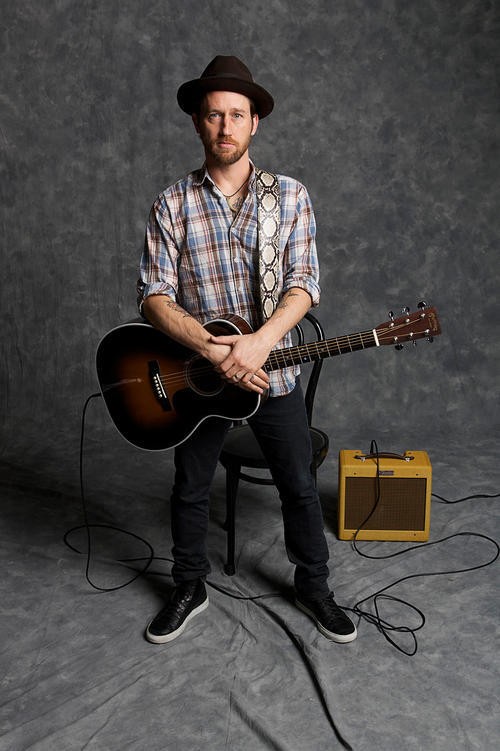 Chris Shiflett and the Dead Peasants -- the rootsier side project of the Foo Fighters guitarist -- will be at the Old Rock House tonight. The show's at 8 p.m. and tickets are $8. We chatted with Shiflett in this week's paper. Read on below for some outtakes in which he discusses his arsenal of guitars, his heroes, being a dad and the status of Foo Fighters.

Matt Wardlaw: You definitely have a nice arsenal of guitars. Do you have a good story behind the acquisition of any of them? Chris Shiflett: I bought an old vintage Lambretta scooter off my friend Jake who is this guy that worked at our studio part-time, and he has a guitar store and stuff. He's just one of those guys that knows how to get things, so he had a friend that was importing these scooters. I bought one of the scooters and then I got it and left it out at our studio for like two years, because I was afraid to ride the thing. It goes a million miles an hour, and it's totally rickety, old and sketchy.

We got to talking one day and he was like, "How about I buy that thing back off you, or maybe we can do a trade." I wound up trading him for an old Fender Telecaster Deluxe that has now become my main guitar. It's like my favorite guitar in years, and that was pretty much the guitar that I played for probably 75 percent of my record. It just worked out, because I was too scared to ride my funky old scooter, I wound up getting my favorite guitar, so it was a good deal in the end.

What about the Brian Setzer Black Phoenix? Oh yeah, I've still got that! I think that may have wound up on a track or two on the record -- yeah, that's a beautiful guitar. I have a lot of those reissue Gretschs and they're really good. They really got it right. When they first reissued all of those Gretschs in the early '90s, they were kind of shitty. I don't know what they did, but they tightened it up and those are good guitars.

Growing up, who were the players that influenced you? When I was a kid, I just listened to whatever my older brothers listened to. So my early memories are Elvis, the Beatles and the Rolling Stones, because that's what my brother Mike had. That grew into KISS -- Ace Frehley was for sure, probably the biggest influence on me as a guitar player, and certainly the reason I wanted to be a guitar player was definitely Ace Frehley.

But then along the way, my brothers got into Sabbath, Deep Purple, Zeppelin, Aerosmith and Nugent, all that stuff from back in the day. That morphed into Motley Crue, when that happened and even before that a little bit, Judas Priest, Iron Maiden, Scorpions and all of that kind of stuff. Then I guess I was still in grade school in the early '80s when the Stray Cats came out, and when I listened to music back then, I didn't think of it in terms of, "Wow, I really like this guitar player." That music just hit me and they were the only non-heavy metal band that I liked back then. And then of course, Randy Rhoads, when those first couple of Ozzy records came out. I never learned how to play guitar like Randy Rhoads, but what he did was definitely a huge influence on just me wanting to be a guitar player. I was never good enough when I was a kid to really learn what he did, because that was pretty advanced.

Then I discovered Hanoi Rocks, which if you remember, they were a glam band from Finland, and that sent me on a whole different course. When I was a kid, I grew up in Santa Barbara, about an hour and a half north of Los Angeles and when Hanoi Rocks happened, that just dropped a bomb on the L.A. rock club scene, and it spawned all of these bands like Guns 'n Roses, Jetboy, Faster Pussycat and Poison. I went from going to Armored Saint and Keel concerts to getting obsessed with all things glam rock, which led me to discover old glam rock, like Bowie, New York Dolls and stuff like that. Which led me to Johnny Thunders and the Heartbreakers and probably in one way or another led me to the Ramones, it's all tied in there together. Of course, The Clash, what Mick Jones did was a big influence on me and Bad Religion was [also] a huge influence - when Suffer came out, that changed punk rock.

Do you think that we have the same kind of guitar heroes these days? Do you have kids coming up to you telling you how much your playing is influencing what they're doing? A little bit sometimes. But I always wonder what they're talking about. Because the things that I'm well known for - if somebody knows me, they know me from the Foo Fighters And the Foo Fighters, like most modern rock bands, there's really not much of any lead [guitar] work in there. I'd already been in No Use For A Name, a punk rock band that didn't have a ton of lead stuff, but there was a little bit. When I joined Foos, it sort of forced me to focus more on my rhythm guitar playing, because that's mostly what it is.

So sometimes kids come up and say "You're my favorite guitar player," and I always think, What part of my guitar playing are you talking about? Because it was different when I was a kid, I wanted to be a lead guitar player, I wanted to be Ace Frehley. That's what most of us guitar players aspired to be. Nowadays, there's not a lot of people playing lead guitar - but you know, there's guys like Jack White that are doing good stuff. But guitar playing is different these days - there's still unexpected people like John Mayer that rip, that are probably influencing, God knows how many guitar players out there. In terms of rock and roll, who's the Angus Young of today? I don't know that would be. I wish there was somebody. I love lead guitar playing, and I intentionally played a lot of leads on my record, because to me, that's the best part of my guitar playing, and it's the thing that I like the most about guitar playing. I recently watched It Might Get Loud (the guitar-based documentary featuring U2 guitarist The Edge, Led Zeppelin guitarist Jimmy Page and guitarist Jack White) and found it very interesting to note each individual player's passion. Edge had a room full of guitars, amps and other guitar-related equipment, while Jimmy Page has a huge music room filled with CDs, vinyl and other musical formats. If someone walked into your house, what would they think your passion is? That's a funny question, because in my house, and I've actually recently had this debate with my wife - I actually don't even have a stereo, dude. It's so pathetic. I have boxes of vinyl and CDs, and they're in my garage, boxed up and I have nowhere to put them in my house. We have three kids, and if you walk into my house, you wouldn't know that a musician even lived in it. Except for, we have a piano and there's probably a couple of acoustic guitars laying around. I don't have my gold records lining the walls, and I don't have a lot of stuff out in the open. [Pauses] I need a music room! [laughs] I don't have it - I have my garage, which is where my drum set and my Pro-Tools rig and a bunch of amps and junk out there. You'd have to make it past the living room, the office and guest room to get in the garage and see my stuff.

So I guess to get more direct, if you're not hanging with the kids and doing stuff there, what are you doing? Well, these days I've been focused on making and getting my record out, and that's been pretty all-consuming. And like I said, my wife and I have three little boys, and that's like a full time job right there. Between those two things, that pretty much takes up all of my time. If someone walked into my house, what would my passion be, they would probably think Legos. "Oh, this guy is so into Legos," because my passion is my kids. Now, we're also getting ready to make the next Foo Fighters record, so we've really starting to get into that, rehearsing and learning new Foo Fighters songs. Things are pretty busy right now - I really don't have a lot of free time. About the only thing I would consider a recreational pastime is my love of watching boxing. But that's about it - I never miss the fights, I find the time one way or another.

When the Foo Fighters did the acoustic tour a few years ago (captured on the Skin and Bones release), you had the opportunity to play some shows opening for Bob Dylan. What was that like? That was really cool - those were fun shows and it was really different. You could just feel that you were playing to a room full of people that didn't really know your band. It was great. We had good response from his crowd and kind of won people over. But you could see that...obviously if you're going to see Bob Dylan - you don't really give a fuck about who's opening the show, you just want to see Bob Dylan. So you get some skeptical faces out there, but we ultimately won them over, most of the time.