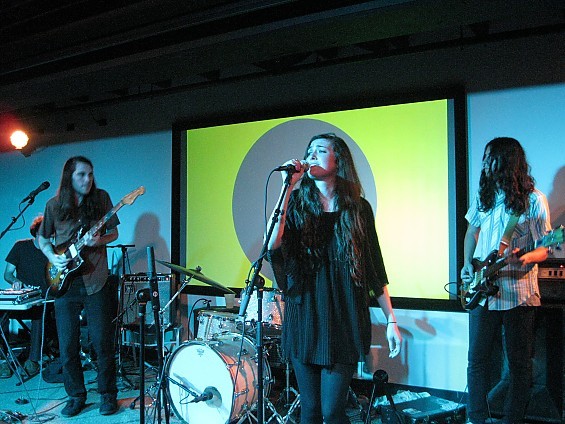 Why yes, St. Louisians do read music blogs. Proof? About 90 people turned out at the Luminary Center for the Arts last night for Cults and Light Pollution -- an impressive turnout for two (relatively unknown) bands.

Cults is the current wunderkind of the underground. The band mysteriously put up three tracks on a BandCamp site earlier this year, causing a fervor on several influential blogs and websites. Since then, those of us guilty of HypeMachine addiction have been mainlining Cults' exuberant '60's pop -- that soul twinge, those bass lines, adorable glockenspiel twinkle, babydoll vocalist Madeline Follin and ominous soundbites from infamous cult leader Jim Jones.

Chicago's Light Pollution burst out of the gate with haphazard charm and tidal ferocity. Candescent keys, fried guitar riffs and tornadic drums made for textural art rock which rides the post-Animal Collective wave. Neither band got a full sound check due to a van accident for Cults and two busted tires for Light Pollution -- and the sound mixing was off for both sets, with Light Pollution bearing the brunt of the bad sound. Still, the bands handled themselves gracefully.

Cults are too cute for words. It's fronted by couple Follin and Brian Oblivion, who are all of 21 years old. The band's sound isn't saccharine sweet, it's pure raw sugar; organic, refreshing and uncomplicated. Cults opened with a darling, '60s-influenced new track, on which Follin's near whine on the lyrics, "I really love him" was pitched like a one-girl Shangri-Las, "Leader of the Pack" style. The second song was all the way surfed out.

Low reverb muddied the first couple songs and washed out Follin's beguiling vocals, but Cults got on track with the soulful charmer "The Curse," one of the four songs it's officially released thus far. The band shone on "Oh My God" and the splendid "Go Outside." Unfortunately missing was the Jim Jones bit at the beginning of "Go Outside"--"To me, death is not a fearful thing, it's living that's treacherous." The band's 26-minute set was understandably brief, seven songs total, though "Most Wanted" was sadly absent.

Oblivion said after the show that the Luminary show was the band's third headlining gig ever. (Cults sold out its first headlining show in Los Angeles and "played to like five people in Lawrence.") The band added that none of the new songs they played have titles yet, they're writing and road testing them on tour before they head into the studio to record its first full length, which is due out in early 2011. Follin was mum on potential labels, and for good reason: It has a fresh sound and it's damn promising for such a new, young band.