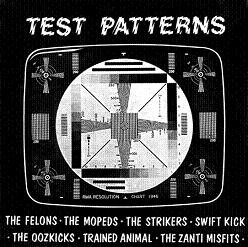 Local label BDR Records is having a pretty good year so far. The late 2009 reissue of Raymilland's Recordings 79-81 has earned airplay on NYC's world-famous radio station WFMU, while Chuck Eddy recently gave it a shout-out in the Village Voice. BDR is looking to continue its hot streak with the long-awaited release of the Welders' 7" EP -- the story of which is described in this article -- and the Test Patterns compilation. The 1981 release, which was compiled by Jet Lag's John the Mailman, featured seven St. Louis original bands: Felons, Zanti Misfits, Trained Animal, Mopeds, Oozkicks, Swift Kick and Strikers. These bands covered ska, mod, new-wave, power-pop and every permutation in between; this new CD reissue boasts music remastered from the original tapes. These tunes have held up shockingly well, and it wouldn't surprise me if Test Patterns received attention outside of St. Louis as well. To celebrate, head to the Schlafly Tap Room on Saturday, July 31 for a release party. Things kick off at 8 p.m. with a listening party, and then Bunnygrunt, Medical Tourists and a Welders tribute band Welder-Grunt will perform. And of course, it's free.