Review + Setlists: Against Me! and Silversun Pickups Prevail Over Storms at Soldiers Memorial Plaza, Saturday, July 24 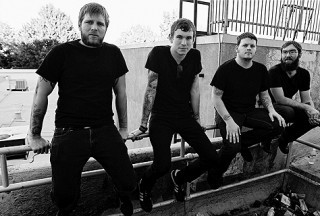 In between the relentless heat and a series of storms, thousands of St. Louisans gathered downtown for what turned out to be another successful installment of the Celebrate St. Louis Concert Series. While the comfy digs and convenient seating of the Arch grounds were certainly missed, Soldiers' Memorial served as an acceptable backup plan -- downtown's cityscape arguably provided a better backdrop than the Missisippi River and various Illinois industrial plants.

Los Angeles's the Henry Clay People opened up the night as droves of sweaty and sticky concertgoers filed in. At approximately 7 p.m., Gainesville, Florida's Against Me! took the stage, and the band was clearly in high spirits. Donning some cherry-red Ray-Bans and an ear-to-ear grin, singer Tom Gabel quickly noticed the near-empty V.I.P. lounge, which served as a barricade between the general population and the stage, and snidely quipped, "I really like having this space between us. It keeps people in their place." And with that, the black-clad militia men launched into their signature brand of howling punk rock chaos.

While Against Me! doesn't get the same press as headliners Silversun Pickups, its fan base at Soldiers Memorial was ever present. From the bearded punks that have been following the band for years, to the newfound fans that hopped on board after AM! signed to the major label Sire in 2005, there was a strong contingent of rowdy fans who were ready to enjoy a free show.

Perhaps the most notable aspect of AM!'s set was the recent addition of former Hold Steady multi-instrumentalist, Franz Nicolay. The mustachioed maestro added a whole new dynamic to the band. From the vaudevillian accordion arrangement in set opener "High Pressure Low" to the oozing organ in "I Was a Teenage Anarchist," Nicolay's backup vocals and musical contributions were quite enjoyable.

As the band ripped into the bouncy, mid-tempo "Ocean", from 2007's New Wave, a sea of fists pumped while Gabel and guitarist James Bowman's traded guttural call-and-response howls. George Rebelo's sturdy drum-pounding cut through the thick air and dared people to try to refrain from bobbing their heads. The band closed the set with "Sink, Florida, Sink" from 2003's As the Eternal Cowboy, which provided AM! die-hards with the perfect sing-along anthem to close out the scorching set. As the sun descended and storms migrated closer to downtown, the breeze picked up and provided perfect pre-Silversun Pickups relief. After an out-of-place plug by a local news personality for some sale on notebooks at Wal-Mart (seriously?), the Pickups hopped on stage and made it clear that they had no problem with enduring a little bit of cooling rain.

From there, the fog machines cranked on and the strobe lights flickered as SSPU barreled through Soldiers Memorial with enough fuzzed-out distortion to knock Jesus & Mary Chain on its ass. Layers of bouncy bass lines, wheezy piano arrangements and machine gun snare drum bursts offered the perfect musical backdrop to accompany the impending storms. Singer Brian Aubert's Billy Corgan-esque wailing bounced off the buildings surrounding the park, and whipped around in the wind, providing an almost dizzying effect. For a four-piece, the Pickups packed in a wall of sound. It's no wonder the band has received so much industry buzz.

The further into Silversun's set, the closer the storm system swelled over downtown St. Louis. By roughly 9:00 pm, many fans retreated towards the exits. While the weather may have cut the festivities a little short, it was certainly a much-needed cool-down for fans and bands alike. In fact, you almost got the sense the Pickups wanted to weather the storm and score the soundtrack to a Midwestern downpour.

Silversun Pickups setlist (courtesy of Jon Scorfina): Growing Old Is Getting Old Well Thought Out Twinkles Sort Of There's No Secrets This Year The Royal We Little Lovers So Polite It's Nice To Know You Work Alone Future Foe Scenarios