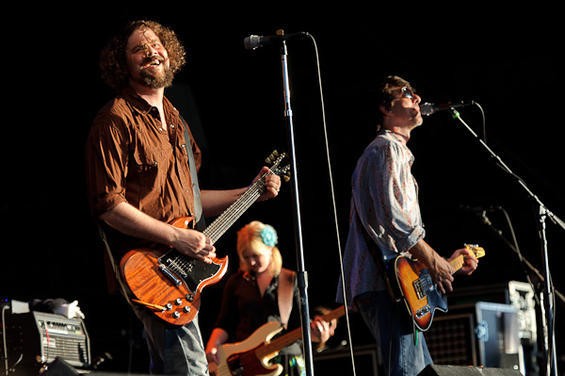 Ask and ye shall receive: Drive-By Truckers were so good on Sunday night opening for Tom Petty in St. Louis, I tweeted that I wished the band would announce a Pageant show soon. Well, it just did this morning, for Saturday, October 2. Tickets are $22 in advance, $25 day of show. The group's latest, The Big To-Do, is one of its finest works yet.

Indie dreamers Blonde Redhead -- who haven't been to town in a very long time; anyone want to chime in? -- also announced a show at the Pageant, on Monday, October 25. Tickets are $22.50, and for the first week on sale, they're buy three, get one free. The band has a new album forthcoming, called Penny Sparkle, due in September. Hear a new song, "Here Sometimes":

[NOTE: The Pageant hasn't confirmed this yet, but according to an email I just got from Blonde Redhead's label, German electronic producer/musician Pantha Du Prince should be opening this show.]

And finally, fan-favorite Guster is making its nearly annual trek to St. Louis on Saturday, October 9. Tickets for the Pageant show are $28.

All of these shows are on sale Friday at 5 p.m.