Interview Outtakes: Emily Haines of Metric on Her Internet Admirers and Vampire Love 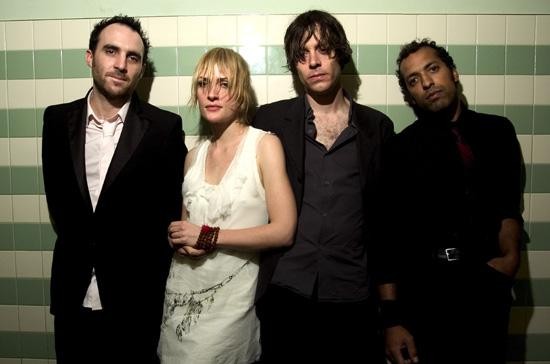 Later today, I'll be trekking out to Maryland Heights for Lilith Fair. Expect photos and a recap tomorrow. In the meantime, please check out our interview with Metric's Emily Haines -- and some outtakes below. Snag Metric's Daytrotter session right here.

Diana Benanti: You guys have garnered major success without marketing, but could you speak a little bit more as to why you didn't market yourselves in the beginning? Emily Haines: It's really interesting now looking back, now that we've started to gain some traction in our careers, I think it was the right attitude because we were dealing with really small labels, like you can barely call it a label, more like philanthropic friendships, right? [laughs] Particularly the label that put out Old World Underground, it was just like a guy, you know? And I think rightly, I felt I'd rather have people not know about us at all, except by coming to our shows, than have someone attempt a big, splashy push that's ultimately going to embarrass all of us. That was really it.

Of course like any band starting out, you wish you could get the attention, you want the magazine cover or whatever, but very early on we just went, "Ugh, fuck it, let's just play." That was the most amazing aspect of that particular record deal, because there was just tour support and not a whole lot more. That was really a blessing. To me, that's the soul of the music. Can you play a live concert, in real time, in reality, can there be a transformative experience? When you go to see a concert, it's so different than being told to like something. I feel like it's the independent expression of the music. All the other stuff is just kind of bullshit.

On Lou Reed: Oh my god! Amazing. Really. I met him at this Neil Young tribute in Vancouver, Broken Social Scene was playing, and this guy Hal Willner who was putting it on had said "Can we get Emily," and I wasn't going to be able to go but then I did, and it was a really amazing experience. Some people are so disarming, there's so much talk about Lou Reed and the way he is.

There's a tumblr called Fuck Yeah Emily Haines that's entirely devoted to you, all the things you say and wear and do, does that freak you out at all? Wait, there's a what?!

A Tumblr, it's sort of an abbreviated blog platform that's set up similar to Twitter. Every post gets a crazy amount of notes and reblogs. So you haven't heard of that I guess? No, and now I have, thanks for the meme! [laughs]

You'll have to Google it. Actually, I have a strict non-self-Googling policy. But I could, you know, instruct people in my vicinity to investigate. But probably what I should do then is I should like, tweet something about Tumblr, right? Fuck yeah, Tumblr.