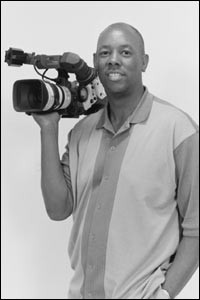 Art Holliday is known for his work as a news anchor on KSDK, but he's also a independent filmmaker in his free time. In his latest project, Johnnie Be Good, he documents the life and career of Johnnie Johnson, Chuck Berry's longtime piano player.

Holliday's received many local grants, but he's also been hosting a series of fundraisers to support the project, which involves intensive travel to obtain interviews. We recently discussed the project and his passion for music and film. Part two of the interview -- which details an upcoming fundraiser with Conan O'Brien's musicians and the icons Holliday's talked to for the documentary -- is coming tomorrow.

When did you first become interested in filmmaking? Oh my. Actually I was interested when I was in high school, but I didn't really have any idea how to accomplish it. So I kinda took a little bit of a detour into broadcasting, which, thankfully worked out well. Then I did my first documentary, Before They Fall Off the Cliff . I started that in probably 1997, and finished it probably around 2001, 2002. That was a documentary about the affect that schizophrenia had on a local family. And about the time I was finishing that documentary, a co-worker of mine, Tony Chambers, one of our photographers at the TV station who is also a musician, was telling me about a friend of his who was producing a CD with Johnnie Johnson. So he was telling me that Johnnie was collaborating with Bonnie Raitt and John Sebastian and Johnny Rivers and Bruce Horsnby. And he knew I was a music fan, so we're just shooting the breeze in the newsroom. He was walking away from my desk, and he turned around, and he said "I know you're into making documentaries. Johnnie Johnson might make an interesting documentary." And that's the idea that led to Johnnie Be Good, for the last seven years.

Wow. So it's been seven years? Yeah. Uh, 27 road trips. Although I have no idea how many miles. My last road trip was about five weeks ago. I was in Los Angeles to interview a guy named Dick Allen. He works for the William Morris agency. He's been a concert booking agent for, I don't know, probably going on 60 years. And he's been Chuck Berry's booking agent for the past 50 years or so. So he knew Chuck Berry and Johnnie Johnson when they were becoming famous as rock & roll stars.

You mentioned that your friend suggested you do a documentary on Johnnie Johnson. Why did you decide to pursue that story? When you're trying to choose a subject for a documentary, you know that it's going to take anywhere from three to ten years of your life. So it'd better be something that is going to engage you over a relatively long period of time. And I'm a big music fan. When you look at Johnnie's story, there is St. Louis music history -- [and] there's literally international music history, because the music that Chuck Berry and Johnnie Johnson collaborated on influenced the Beatles and the Rolling Stones.

So it wasn't just music that was popular here in the U.S. It's music that inspired the British invasion.Those things alone, and the fact that both Johnnie and Chuck are in the Hall of Fame, that's a pretty good starting point for a documentary. Literally, St. Louis was one of the handful of cities that was instrumental in the birth of rock & roll. Certainly Memphis, Chicago, ya know there are a lot of cities that could rightfully claim to be one of the birthplaces of rock & roll. St. Louis takes a back seat to no one when it comes to that genre of music.

On New Year's Eve in 1952, when [Johnnie's] sax player had a stroke, he needed an immediate replacement with a union card, and he called Chuck Berry. And that's one of the most famous phone calls in rock & roll. By telling Johnnie's story, it's the flip side of Chuck Berry's story, the story that Taylor Hackford dealt with in Hail! Hail! Rock 'n' Roll. Johnnie's side of the story is that he was always in the shadow of the band, he was never famous outside of the music industry. Most people, if you walk down the streets of St. Louis and said, "Do you know who Johnnie Johnson is?" Probably seven, eight out of ten would look at you with a blank stare.

In terms of music, Chuck Berry and Johnnie Johnson were like Siamese twins. They were in each other's heads musically in a way that only a handful of artists are with their musical partners -- ya know, Simon and Garfunkel, Mick Jagger and Keith Richards, Lennon and McCartney. In fact, Keith Richards, who was always the number one interview that I needed for this film, in his autobiography said that the songwriting team of Chuck Berry and Johnnie Johnson is the equal of Jagger/Richards and Lennon/McCartney.

Part of the controversy, if you will, or certainly part of the story is whether Johnnie should have received songwriting credits. And that's dealt with, along with many other aspects of Johnnie's life - his alcoholism, the way he's revered by musicians like Keith Richards and Eric Clapton and Bonnie Raitt and Paul Shaffer and on and on and on. There are many aspects of Johnnie's life that I deal with, not just his relationship with Chuck Berry. But certainly that's a central issue, the fact that they helped create rock & roll.

You mentioned his relationship with Chuck Berry and the songwriting credit issue. Have you interviewed Chuck Berry for the film? No. About a year before Johnnie died, we had both gone to speak to Chuck, and the short version of the story is that he said he wanted script approval before he would have any further conversation. So that's the last time that I communicated with Chuck. And my plan is, because I'm actually editing now, I'm going to make another interview offer.

Honestly, I don't expect him to do an interview. That's his choice. Ya know, obviously it's not good for my film. I'd love to hear Chuck Berry talk about the way they created music. Chuck has one version, Johnnie has another version. It's the classic "he said/he said" situation. And in many ways it's a moot point, because Johnnie's not going to benefit. He's not with us anymore.

Ya know, Chuck powered over Johnnie in terms of international fame. But the fact that almost 50 years after that music was created, people are still debating it -- I find that fascinating. It's a chance to put St. Louis back in the musical spotlight again and point out that not only did Chuck Berry and Johnnie Johnson heavily influence the genre that they chose, but Miles Davis was here at the same, so was Ike Turner. I mean, Ike turner and the Kings of Rhythm were contemporaries of Chuck Berry and Johnnie Johnson. I've actually got a newspaper flyer where all three of those musicians are performing at the Cosmopolitan Club in East St. Louis.

There's also a film currently being made about Oliver Sain, with a very similar message. Yes. I actually e-mailed the filmmaker to pass along my good wishes to him because obviously we're kind of traveling along parallel paths, and actually Johnnie did a recording with Oliver Sain. In my e-mail I pointed that out to him and said, "If there's anything I can do to help." I haven't heard back, but that's okay. I'm rooting for every independent filmmaker in America, because I know how much time and effort and blood sweat and tears and credit card bills that it takes to realize a project like the ones that we choose. I'm definitely rooting for him.