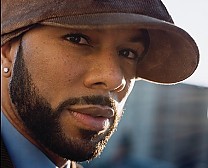 If you're heading to the Arch tonight to check out Chicago rapper Common at Celebrate St. Louis, you probably won't be the only one looking for the crowds in utter confusion. Due to the Mississippi's high levels, the summer concert series (which is no longer called Live on the Levee, thanks for asking) has been relocated to the Soldiers Memorial Military Museum and the surrounding parks, so the streets will be blocked from Tucker to 14th and from Market to Pine.

Openers start at 6 p.m., and headliners hit the Budweiser Main Stage at 8.