Active Child Bounces Off the Walls Tomorrow Night at Firebird 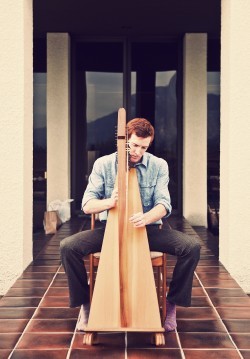 Give a former choirboy a harp and unlimited access to synthesizers and you've got the icy austerity of Active Child.

The neophiliacs among us have been raving about this Los Angeles act since SXSW (the dreaded "next big thing" tag has been applied more than once). Pat Grossi is the former choirboy in question; he's been playing under the Active Child moniker since 2008, but didn't put out his first release, Sun Rooms, until earlier this year, and even then it could only be found on 100 limited-edition cassettes. (Cassette-only releases are becoming de rigueur for savvy new artists who want to keep "the underground" underground and not all over the Internet. One wonders why no one in the upper echelons of the music industry didn't glom onto this idea years ago.)

Grossi's tunes are the last thing you'd expect from a dude with a harp. His angelic tenor sounds like a less rustic, more rarefied Bon Iver when layered on top of itself, and any of the tracks on his Curtis Lane EP, which came out last month, would have been perfectly suited for a make-out scene in a John Hughes film 25 years ago.

Active Child is currently on tour opening for Canadian oddballs Islands; you can check them both out tomorrow at the Firebird.