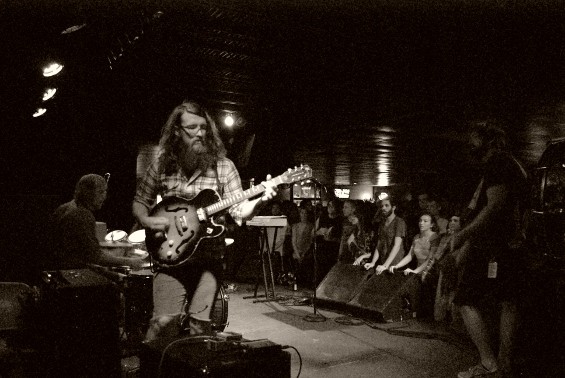 Prior to their first full-length, Perch Patchwork (Barsuk Records), which came out last week, Maps & Atlases had gotten away with a discography of just two EPs in four years. That's because each EP, not to mention each song, is an internal combustion of melodies and percussion fueled by technical and mindful musicians. With Perch Patchwork, an evolution toward a more lush, pop-oriented aesthetic has taken hold, the band's math-rock intensity having apparently waned. But Tuesday night at the Firebird the Chicago four-piece proved they can successfully blend elements from both styles to create challenging, melodious pop.

Lead singer Dave Davison's distinctive croon immediately projected over the audience as Maps & Atlases started their set with the bouncy melody of "Israeli Caves." It's one of the simpler songs on the new LP, following a recipe of three parts breezy pop, one part math rock, and one part funky fresh.

"The Charm" was a knockout. Davison sang, "I don't think there's a sound that I hate more than the sound of your voice," as Chris Hainey's drums and Erin Elders' guitar slowly built momentum. Right before the climax, Elders and bassist Shiraz Dada abandoned their posts to take up auxiliary percussion and form a bombastic drum circle with Hainey.

I didn't expect to hear "Glamorous Glowing" in this setting -- the track was recorded by Davison's solo project Cast Spells for their 2009 EP Bright Works and Baton. But it was nice to have an alternative take on the song with the muscle of Maps & Atlases behind it. The only possible improvement to the band's set would have been the addition of the strings and horns featured on Perch Patchwork. They make the album a slightly different beast, as you have a more comprehensive understanding of each song. Then again, being able to see Maps & Atlases shred live was well worth the trade-off. As made evident by the ogling crowd, it was mind-blowing to see the group's four members simultaneously tapping, slapping and clapping onstage. 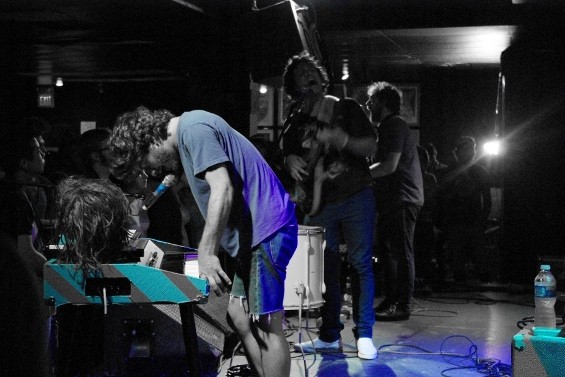 Classically trained vocalist Jim Harvey of opening act Drink Up Buttercup has the face of Zach Galifianakis and the voice of Carey Mercer (Frog Eyes, Swan Lake). His vocals are crystalline, but in a second they can nosedive into impulsive, rattling woots and woos. The Philly quintet laid down thick, stirring rock in the spirit of Black Mountain with "Young Ladies" and "Even Think," and "Sosey and Dosey" had an unnerving gothic-carnival backbone to it, complete with organ and Harvey channeling a creepy chanteur.

Drummer Mike Cammarata and bassist Ben Mazzochetti were physical mavericks, dominating their respective instruments with sheer brute force. It therefore came as no surprise when Mazzochetti admitted, "All of our stuff is broken." After taking a beating like that each night, it's surprising they have any instruments to play at all.

The evening's second opener, the Globes, were immediately recognizable as Seattleites due to a brooding, dark northwestern detachment probably caused by endless drizzle and dreariness. "A Stitch Couldn't Save the World" was reminiscent of a Menomena song in its sing-talk vocals, and overall the four-piece band gave a sharp performance in their St. Louis debut, as well as a reason to keep listeners excited about future releases.