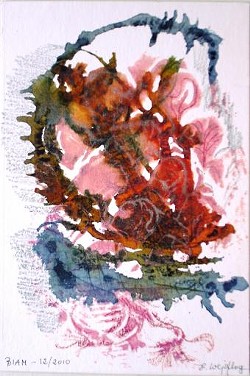 Nathan Truesdell, a Columbia resident who produced 2009's Convention and a forthcoming feature-length documentary about Branson, is currently working on his directorial debut, "The Art of Making Money." Produced by AJ Schnack, a Belleville native and director of Kurt Cobain: About a Son (2006), the doc explores currency design and counterfeiting as art forms.

One of the individuals featured in "The Art of Making Money" is Lars Kraemmer, a Danish man who's begun using original art money as currency -- if he needs to pay for a service, he'll draw something up and attempt to barter with it. He's even created an online community, artmoney.org, which describes itself as "an international art project presenting a global, alternative 'currency.'"

To support filming and production costs, Truesdell and a number of artists who specialize in "art money," including Stephen Barnwell, Cedric Mnich and Brett Davis, are bringing an exhibition of related works to Columbia's Orr Street Studios tonight.

The exhibition/promotion/fundraiser will include a silent auction of contributions from a variety of artists, with art money as the theme. Beer will be donated by Broadway Brewery, and local favorites the Hooten Hallers will perform. "The Art of Making Money" has also received local support from Sparky's Ice Cream, which created a special flavor in support of the project: U.S. Mint Chocolate Chip.

A donation of $10 is requested, but attendees will have the opportunity to design their own currency as part of their donation, which will then be added to the exhibit.