B-52s Shake St. Louis' Honey Buns With Their Funplex Under the Arch

Fair St. Louis is a somewhat unusual venue for artists, especially ones that aren't entirely mainstream. Much of the crowd is simply there to get a good view of the fireworks, and if they're at all familiar with the artist in question -- in this case, the B-52s -- they've most likely heard the hit singles (1989's "Love Shack," 1979's "Rock Lobster"), which are then played in a somewhat obligatory manner. I wasn't sure what to expect of the B-52s, and I definitely didn't know what to expect of the massive crowd.

But on Sunday the veteran band from Athens, Georgia -- for those just tuning in, three of the four members are now in their 50s, while Kate Pierson is 62 -- proved they not only have staying power but are still energetic and youthful. 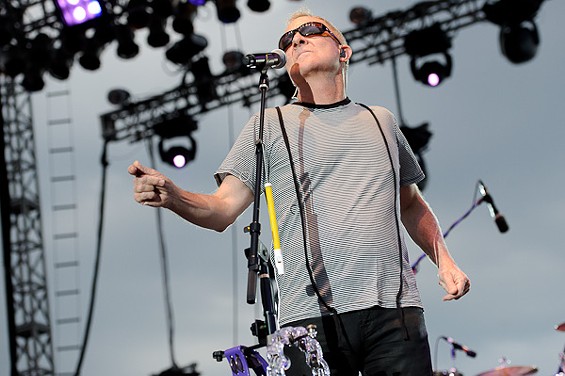 Frontman Fred Schneider, who we recently interviewed, appeared almost bored at times, but compensated with his trademark '60s-beach-party-movie dance moves and silly banter. He dedicated the performance of "Cosmic Thing" to Chuck Berry, announcing, "Here's something to shake your honey buns to!" He also snuck in some sly, PG-rated humor when he introduced "Planet Claire" by shouting, "Let's go beyond Uranus! And Neptune! And Pluto ..."

Schneider also commented on how nice it felt to be playing "under the beautiful Arch" amid the "fragrance of good fried foods and Porta-Potties." 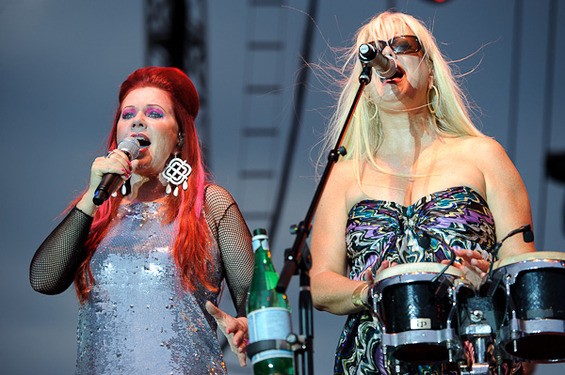 The lovely ladies of the group, Pierson and Cindy Wilson, still possess the same powerful, versatile vocal chords, and they delivered the full experience, complete with dance moves, teased hair, and one sparkly dress.

All in all, the crowd was receptive and had fun. There were lots of folks gettin' down, while whole families took photos of said folks and laughed (with, not at). In general, good times were had. People seemed to "get" the B-52s, with the exception of the confused gentleman who walked past me and said, "They sound just like Pink Floyd."

At some point during "Hot Corner," a track from the band's 2008 album Funplex, the rain that had been threatening the event all day returned as a light drizzle. Luckily, it never worsened, and the show ended with a crowd of thousands -- well, some of the thousands, anyway -- dancing to "Rock Lobster," leading into the nationally renowned St. Louis July 4 fireworks display over the Mississippi.

It was a cosmic thing.