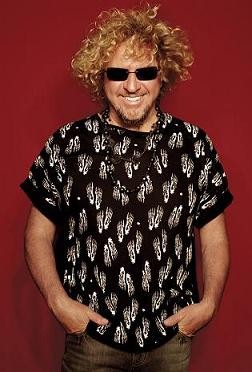 Murray Wasylnuk has always liked filmmaking, but didn't start getting serious about his craft until he attended the New York Film Academy in March 2008. After cutting his teeth doing an on-going series called Behind the Rock - which films fans interviewing their favorite bands, such as Canadian rock legends 54*40, Marcy Playground and Davy Knowles - he's now turned his attention to a documentary about Sammy Hagar's fans, colloquially known as "Redheads."

Although the documentary, United States of Cabo, is very much still in progress, Wasylnuk hopes to finish it within two years and take it on the U.S. and Canadian film festival circuit. In the meantime, he's arrived in St. Louis - known to most as Redhead Fan Central - for Hagar's show today at the Verizon Wireless Amphitheater. Fans attending the show can meet up and share stories with Wasylnuk at Sammy's Beach Bar and Grill at the nearby Harrah's Casino in Maryland Heights. Email him at [email protected] if interested. If you miss the filmmaker today, not to worry: Wasylnuk says he'll be in town through July 5. For more information, check out his film company, Murmur Films, and Facebook information page.

Describe the documentary to me. What do you hope to achieve with it? My Sammy Hagar fan documentary came to be when I noticed that there really wasn't anything out there that pointed a spotlight on the fans and their stories, and why us "Redheads" do what we do and travel all over the U.S. and Canada to see Sammy Hagar live. You quickly learn that it's not just about the music, but about being welcomed into a very special family. So many of us have made lifelong friendships and even got married, all thanks to Sammy Hagar!

My blessing came from Sammy's people when I agreed to keep the Mexico angle out of my film, as the idea of Sammy being portrayed as "The King of Cabo" really has been beaten to death. ([It was] something which I wasn't interested in anyway.) My documentary is titled United States of Cabo because of all of the fans that live across this great nation who meet up in Tahoe every May for the Cinco de Mayo celebrations -- and especially the hordes of fans that call St. Louis home. From our healthy obsessions with his music, collecting memorabilia to designing custom T-shirts and collectibles, even dedicating rooms and entire houses to the Cabo Wabo way of life, we all have a little Cabo in every one of us. From San Francisco to New Jersey, Tampa Bay to Minnesota, you see how this title came to be United States of Cabo.

My documentary will feature interviews with Redheads from all over, a few key roadies and personnel, as well as some rare Chickenfoot and Wabo footage that I shot in Tahoe. My dream would be to travel the country, capturing stories from Redheads in every city and town that I could, but since I am producing this film on my own with limited funding, the story will focus on South Lake Tahoe and St. Louis as the two main locations for the film.

Why did you decide to choose Sammy Hagar's fans to spotlight? I chose Sammy's fans because I am a Redhead myself. The idea came to me while I was waiting in the alley behind Vancouver's Commodore Ballroom after the second show on the road test tour with Chickenfoot, waiting for the chance to meet Sammy and personally hand him a film proposal for a scripted road movie that would see Hagar appear in a cameo. ([This is] another project altogether.)

As I hung around for the band to slip out of the venue, myself and a few other fans were trading Sammy stories and listening to long-time roadies tell cool stories from various tours between loading stage equipment. Having a life-long interest in the documentary format and all things behind the scenes, I began to imagine a project that would capture the stories of these roadies that work tirelessly day in and day out to bring us these amazing rock shows, coupled with a massive undertaking of setting out to capture as many stories from Redheads that I could. [This] would make for one interesting documentary from a fan perspective - told exclusively by a fan, for the fans, with some rare concert performance footage highlighting the film.

What have you learned so far about Redheads in the filming you've done? Has anything surprised you? The stories that we've managed to capture so far have made us laugh and a few even led us to tears. These stories that the fans have been opening up and sharing are what will make this film something special.

Any dream interviews or collaborations? I would very much like to have a short interview with Sammy himself, at the very least have him accept my invitation to present the completed film and I'm working hard to make this a reality. In the end, this will be a film for Sammy Hagar and his tremendous family of Redheads. Something that will make all those who participated, very proud to be a part of.